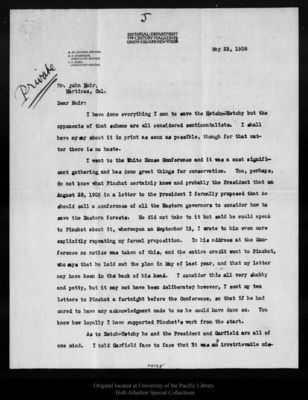 R.W. GILDER,EDITOR.R.U.JOHNSON.ASSOCIATE EDITOR.C.C.BUEL.ASSISTANT EDITORMr.John Muir,Martinez,Cal.Dear Mui:I have done everything I can to save the Hetch-Hetchy but the opponents of that scheme are all considered sentimentalists.I shall have my [illegible] about it in print as soon as possible, though for that matter ther is no haste.I want to the White House Conference and it was a most significant gathering and has done great things for conservation. You, perhaps, do not know what Pinchot certainly knew and probably the President that on August 28, 1906 in a letter to the president I formally proposed that he should call a conference of all the Eastern governors to consider how to save the Eastern forests.He did not take to it but said he would speak to Pinchot about it, whereupon on September 15, I wrote to him even more explicitly repeating my formal proposition.In his address at the Conference no notice was taken of this, and the entire credit went to Pinchot, who says that he laid out the plan in May of last year,and that my letter may have been in the back of his head.I consider this all very shabby and petty, but it may not have bean deliberate; however,I sent my two letters to Pinchot a fortnight before the Conference, so that if he had cared to have any acknowledgment made to me he could have done so.You know how loyally I have supported Pinchot's work from the start.As to Hetoch-Hetchy he and the President and Garfield are all of one mind.I told Garfield face to face that It was an irretrievable mis-04178