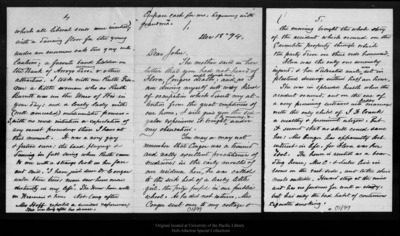 4which all liberal souls were invited with a dancing floor for the young under an enormous oak tree gay with lanterns; a favorite band hidden on the Bank of Arroyo See discoursing & other attractions. I took with me Ruth Ginner a little woman who as Ruth Burnett was in the Univ of Wis in your day; and a lovely lady with (well concealed) mediumistic powers. I, with no more intention or expectation of any occult proceedings than I have at this moment. It was a very gay & festive scene; the band playing & dancing in full swing when Ruth came to me with a strange look on her face and said, "I have just seen Dr. Conger under those trees; never saw him more distinctly in my life." She knew him well in Wisconsin & here. Not long after Mrs. Hoff reported a similar experience This was long after his decease,Embrace each for me, beginning with grandma.1.Dec 18" 94.Dear John.The mother said in her letter that you had not heard of Flora, Congers death until through me, and as I am driving myself into every kind of occupation which diverts my attention from the great emptiness of our home, I will give you the singular experience it brought to memory, & under my observation.You may or may not remember that Conger was a trained and really excellent practitioner of medicine; in the early months of our residence here, he was called to the sick bed of a lovely little girl, the prize pupil in our public school. As he did not return, Mrs Conger sent once to my cottage & 018995the morning brought the whole story of the accident which occurred on the Carmelita property through which the party drove on their ride homeward.Flora was the only one seriously injured, & her dislocated ancle was set in plastered dressings within half an hour.She was in splendid health when the accident occurred, and on the eve of a very promising entrance into happy marriage with the only child of J. F. Crank a wealthy & prominent citizen. But it seemd that no skill could save her; Mrs Conger has apparently lost interst in life, for Flora was her idol. The house is rented as a boarding house; Mrs. C. & Lulu live in rooms on the east side, and take their meals outside. Howard stays at the mine and has no fondness for work or study, but has only the bad habit of continuous cigarette smoking.01899