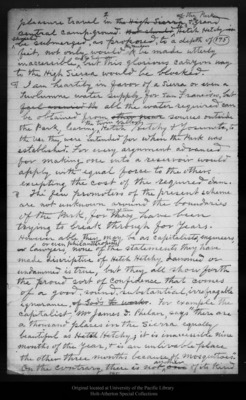 2pleasure travel in the Park & the grand central camp-ground. If Hetch Hetchy should be submerged, as proposed, to a depth of 175 feet, not only would the Meadows be made utterly inaccessible along the Tuolumne but this glorious canon [diacritic] way to the High Sierra would be blocked.I am heartily in favor of a Sierra or even a Tuolumne water supply for San Francisco, but all the water required can be obtained from sources outside the Park, leaving the twin Valleys, Hetch Hetchy & Yosemite, to the use they were intended for when the Park was established. For every argument advanced for making one into a reservoir would apply with equal force to the other, excepting the cost of the required dam.The few promoters of the present scheme are not unknown around the boundaries of the Park, for some of them have been trying to break through for years. However able they may be as capitalists, engineers, lawyers, or even philanthropists, none of the statements they have made discriptive of Hetch Hetchy dammed or undammed is true, but they all show forth the proud sort of confidence that comes of good, sound, substantial, irrefragable ignorance. For example, the capitalist, Mr James D. Phelan, says "there are a thousand places in the Sierra equally beautiful as Hetch Hetchy; it is inaccessible nine months of the year, & is an unlivable place the other three months because of mosquitoes." On the contrary there is not another of its kind04151