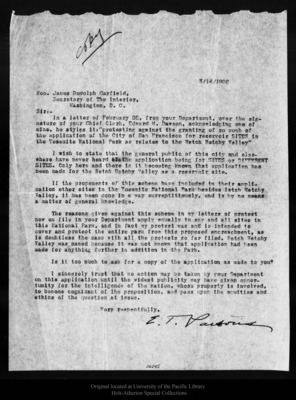 3/14/1908Hon. James Rudolph Garfield,Secretary of The Interior,Washington. D. C.Sir:-In a letter of February 2C, from your Department, over the signature of your Chief Clerk, Edward M. Dawson, acknowledging one of mine, he styles it:"protesting against the granting of so much of the application of the City of San Francisco for reservoir SITES in the Yosemite National Park as relates to the Hetch Hetchy Valley"I wish to state thai the general public of this city and elsewhere have never heard [Illegible]the application being for SITES or DIFFERENT SITES. Only here and there is it becoming known that application hae been made for the Hetch Hetchy Valley as a reservoir site.If the proponents of this scheme have included in their application other sites in the Yosemite National Park besides letch Hetchy Valley, it has been done in a way surreptitiously, and is by no means a matter of general knowledge.The reasons given against this scheme in my letters of protest now on file in your Department apply equally to any and all sites in this National Park, and in fact my protest was and is intended to cover and protect the entire park from this proposed encroachment, as is doubtless the case with all the protests so far filed. Hetch Hetchy Valley was named because it was not known that application had been made for anything further in addition in tha Park.Is it too much to ask for a copy of the application as made to you?I sincerely trust that no action may be taken by your Department on this application until the widest publicity may have given opportunity for the intelligence of the nation, whose property is involved, to become cognizant of the proposition, and pass upon the equities and ethics of the question at issue.Very respectfully,E. T.[Illegible]06245