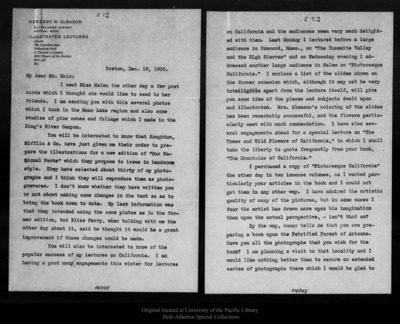 I sent Miss Helen the other day a few post cards which I thought she would like to send to her friends. I am sending you with this several photos which I took in the Mono Lake region and also some studies of pine cones and foliage which I made in the King1s River Canyon.
You will be interested to know that Houghton, Mifflin & Co. have just given me their order to prepare the illustrations for a new edition of "Our National Parks" which they propose to issue in handsome style. They have selected about thirty of my photographs and I think they will reproduce them as photogravures. I don»t know whether they have written you or not about making some changes in the text so as to bring the book down to date. My last information was that they intended using the same plates as in the former edition, but Bliss Perry, when talking with me the other day about it, said he thought it would he a great improvement if these changes could be made.
You will also be interested to know of the popular success of my lectures on California. I am having a good many engagements this winter for lectures

on California and the audiences seem very much delighted with them. Last Monday I lectured before a large audience in Concord, Mass., on "The Yosemite Valley and the High Sierras" and on Wednesday evening I addressed another large audience in Salem on "Picturesque California." I enclose a list of the slides shown on the former occasion which, although it may not be very intelligible apart from the lecture itself, will give you some idea of the places and subjects dwelt upon and illustrated. Mrs. Gleason's coloring of the slides has been remarkably successful, and the flowers particularly meet with much commendation. I have also several engagements ahead for a special lecture on "The Trees and Wild Flowers of California," in which I shall take the liberty to quote frequently from your book, "The Mountains of California."
I purchased a copy of "Picturesque California" the other day in two immense volumes, as I wanted particularly your articles in the book and I could not get them in any other way. I have admired the artistic quality of many of the pictures, but in some cases I fear the artist has drawn more upon his imagination than upon the actual perspective, - isn't that so?
By the way, rumor tells me that you are preparing a book upon the Petrified Forest of Arizona. Have you all the photographs that you wish for the book? I am planning a visit to that locality and I would like nothing better than to secure an extended series of photographs there which I would be glad to