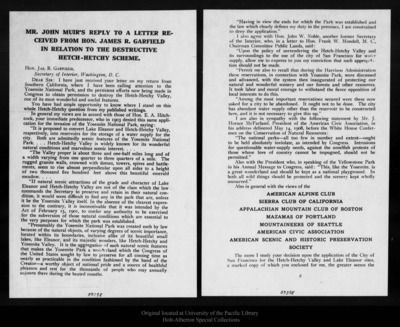 Dear Sir: I have just received your letter on my return from Southern California, where I have been calling attention to the Yosemite National Park, and the persistent efforts now being made in Congress to obtain permission to destroy the Hetch-Hetchy Valley. one of its most wonderful and useful features.
You have had ample opportunity to know where I stand on this whole Hetch-Hetchy question from my published writings.
In general my views are in accord with those of Hon. E. A. Hitchcock, your immediate predecessor, who in 1903 denied this same application for the invasion of the Yosemite National Park, saying:
"It is proposed to convert Lake Eleanor and Hetch-Hetchy Valley, respectively, into reservoirs for the storage of a water supply for the city. Both are admittedly scenic features of the Yosemite National Park. . . . Hetch-Hetchy Valley is widely known for its wonderful natural conditions and marvelous scenic interest.
. . ."The Valley proper is about three and one-half miles long and of a width varying from one quarter to three quarters of a mile. The rugged granite walls, crowned with domes, towers, spires and battle- ments, seem to rise almost perpendicular upon all sides to a height of two thousand five hundred feet above this beautiful emerald meadow.
. . ."If natural scenic attractions of the grade and character of Lake Eleanor and Hetch-Hetchy Valley are not of the class which the law commands the Secretary to preserve and retain in their natural condition, it would seem difficult to find any in the park that are, unless it be the Yosemite Valley itself. In the absence of the clearest expression to the contrary, it is inconceivable that it was intended by the Act of February 15, 1901, to confer any authority to be exercised for the subversion of those natural conditions which are essential to the very purposes for which the park was established.
"Presumably the Yosemite National Park was created such by law because of the natural objects, of varying degrees of scenic importance, located within its boundaries, inclusive alike of its beautiful small lakes, like Eleanor, and its majestic wonders, like Hetch-Hetchy and Yosemite Valley. It is the aggregation of such natural scenic features that makes the Yosemite Park a wonderland which the Congress of the United States sought by law to preserve for all coming time as nearly as practicable in the condition fashioned by the hand of the Creator-a worthy object of national pride and a source of healthful pleasure and rest for the thousands of people wh o may annually sojourn there during the heated months

09398"Having in view the ends for which the Park was established and the law which clearly defines my duty in the premises, I am constrained to deny the application."
I also agree with Hon. John W. Noble, another former Secretary of the Interior, who, in a letter to Hon. Frank W. Mondell, M. C, Chairman Committee Public Lands, said:
"Upon the policy of surrendering the Hetch-Hetchy Valley and its surroundings to the use of the city of San Francisco for wafer supply, allow me to express to you my conviction that such appropriation should not be made.
'"Permit me also to recall that during the Harrison Administration these reservations, in connection with Yosemite Park, were discussed and advanced, with the system then inaugurated of protecting our natural and wonderful scenery and our forests and other resources. It took labor and moral courage to withstand the fierce opposition of local interests to do this.
"Among the most important reservations secured were these now asked for a city to be abandoned. It ought not to be done. The city has abundant water supply other than the reservoir to be constructed here, and it is not necessary to give this up."
I am also in sympathy with the following statement by Mr. J. Horace McFarland. President of the American Civic Association, in his address delivered May 14, 1908, before the White House Conference on the Conservation of Natural Resources:
"The national parks-all too few in number and extent-ought to be held absolutely inviolate, as intended by Congress. Intrusions for questionable water-supply needs, against the unselfish protests of those whose love of country cannot be impugned, should not be permitted."
Also with the President who. in speaking of the Yellowstone Park in his Annual Message to Congress, said: "This, like the Yosemite, is a great wonderland and should be kept as a national playground. In both all wild things should be protected and the scenery kept wholly unmarred."
Also in general with the views of the
AMERICAN ALPINE CLUB
SIERRA CLUB OF CALIFORNIA
APPALACHIAN MOUNTAIN CLUB OF BOSTON
MAZAMAS OF PORTLAND
MOUNTAINEERS OF SEATTLE
AMERICAN CIVIC ASSOCIATION
AMERICAN SCENIC AND HISTORIC PRESERVATION
SOCIETY

The more I study your decision upon the application of the City of San Francisco for the Hetch-Hetchy Valley and Lake Eleanor sites, a marked copy of which you enclosed for me. the greater seems the