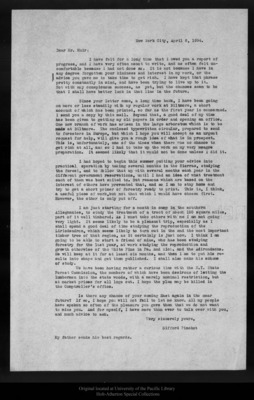 New York City, April 8, 1894.Dear Mr. Muir:I have felt for a long time that I owed you a report of progress, and I have very often meant to write, and as often felt uncomfortable because I had not done so. It is not because I have in any degree forgotten your kindness and interest in my work, or the advice you gave me to take time to get rich. I have kept that phrase pretty constantly in mind, and have been trying to live up to it. Not with any conspicuous success, as yet, but the chances seem to be that I shall have better luck in that line in the future.Since your letter came, a long time back, I have been going on more or less steadily with my regular work at Biltmore, a short account of which has been printed, so far as the first year is concerned. I send you a copy by this mail. Beyond that, a good deal of my time has been given to getting my old papers in order and opening an office. One new branch of work has arisen in the large arboretum which is to be made at Biltmore. The enclosed typewritten circular, prepared to send to foresters in Europe, but which I hope you will accept as an urgent request for help, will give you a rough idea of what is in prospect. This is, unfortunately, one of the times when there was no chance to get rich at all, and so I had to take up the work on my very meagre preparation. It seemed likely that it would not be done unless I did it.I had hoped to begin this summer putting your advice into practical operation by taking several months in the Sierras, studying the forest, and to follow that up with several months each year in the different government reservations, until I had an idea of what treatment each of them was best suited to. But reasons which are based on the interest of others have prevented that, and so I am to stay home and try to get a short primer of forestry ready to print. This is, I think, a useful piece of work,but not that which I would have chosen first. However, the other is only put off.I am just starting for a month in camp in the southern Alleghanies, to study the treatment of a tract of about 150 square miles, part of it well timbered. As I must take others with me I am not going very light. It seems likely to be a pleasant trip, especially as I shall spend a good deal of time studying the reproduction of the Liriodendron, which seems likely to turn out in the end the most important timber tree of that region, as it certainly is just now. I think I am going to be able to start a friend of mine, who has been studying forestry for the last year, at work studying the reproduction and growth otherwise of the white Pine in Pa. and Mich, and the Adirondacks. He will keep at it for at least six months, and then I am to put his results into shape and get them published. I shall also make his scheme of study.We have been having rather a curious time with the N. Y. State Forest Commission, the members of which have been desirous of letting the lumbermen into the state woods, with a merely nominal restriction, but at market prices for all logs cut. I hope the plan may be killed in the Comptroller's office.Is there any chance of your coming East again in the near future? If so, I hope you will not fail to let me know. All my people have spoken so often of the pleasure you gave them that we do not want to miss you. And for myself, I have more than ever to talk over with you, and much advice to ask.Very sincerely yours,Gifford PinchotMy father sends his best regards.