The Voters of San Francisco 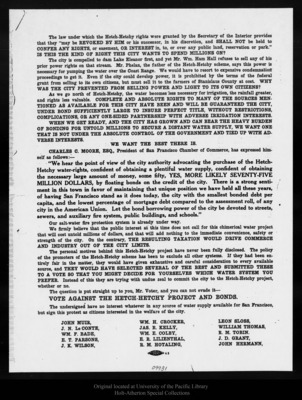 The law under which the Hetch-Hetchy rights were granted by the Secretary of the Interior provides that they "may be REVOKED BY HIM or his successor, in his discretion, and SHALL NOT be held to CONFER ANY RIGHTS, or easement, OR INTEREST in, to, or over any public land, reservation or park." IS THIS THE KIND OF RIGHT THIS CITY WANTS TO SPEND MILLIONS ON?
The city is compelled to dam Lake Eleanor first, and yet Mr. Wm. Ham Hall refuses to sell any of his prior power rights on that stream. Mr. Phelan, the father of the Hetch-Hetchy scheme, says this power is necessary for pumping the water over the Coast Range. We would have to resort to expensive condemnation proceedings to get it. Even if the city could develop power, it is prohibited by the terms of the federal grant from selling to its own citizens, but must sell it to the farmers of Stanislaus County at cost. WHY WAS THE CITY PREVENTED FROM SELLING POWER AND LIGHT TO ITS OWN CITIZENS?
As we go north of Hetch-Hetchy, the water becomes less necessary for irrigation, the rainfall greater, and rights less valuable. COMPLETE AND ABSOLUTE RIGHTS TO MANY OF THE SOURCES MENTIONED AS AVAILABLE FOR THIS CITY HAVE BEEN AND WILL BE GUARANTEED THE CITY, UNDER BOND SUFFICIENTLY LARGE TO INSURE PERFECT TITLE, WITHOUT RESTRICTIONS, COMPLICATIONS, OR ANY ONE-SIDED PARTNERSHIP WITH ADVERSE IRRIGATION INTERESTS.
WHEN WE GET READY, AND THE CITY HAS GROWN AND CAN BEAR THE HEAVY BURDEN OF BONDING FOR UNTOLD MILLIONS TO SECURE A DISTANT WATER SUPPLY, WE WANT ONE THAT IS NOT UNDER THE ABSOLUTE CONTROL OF THE GOVERNMENT AND TIED UP WITH ADVERSE INTERESTS.
WE WANT THE BEST THERE IS.
CHARLES C. MOORE, ESQ., President of San Francisco Chamber of Commerce, has expressed himself as follows:-"We hear the point of view of the city authority advocating the purchase of the Hetch-Hetchy water-rights, confident of obtaining a plentiful water supply, confident of obtaining the necessary large amount of money, some fifty, YES, MORE LIKELY SEVENTY-FIVE MILLION DOLLARS, by floating bonds on the credit of the city. There is a strong sentiment in this town in favor of maintaining that unique position we have held all these years, of having San Francisco stand as it does today, the city with the smallest bonded debt per capita, and the lowest percentage of mortgage debt compared to the assessment roll, of any city in the American Union. Let the bond borrowing power of the city be devoted to streets, sewers, and auxiliary fire system, public buildings, and schools."
Our salt-water fire protection system is already under way.
We firmly believe that the public interest at this time does not call for this chimerical water project that will cost untold millions of dollars, and that will add nothing to the immediate convenience, safety or strength of the city. On the contrary, THE RESULTING TAXATION WOULD DRIVE COMMERCE AND INDUSTRY OUT OF THE CITY LIMITS.
The personal motives behind this Hetch-Hetchy project have never been fully disclosed. The policy of the promoters of the Hetch-Hetchy scheme has been to exclude all other systems. If they had been entirely fair in the matter, they would have given exhaustive and careful consideration to every available source, and THEY WOULD HAVE SELECTED SEVERAL OF THE BEST AND SUBMITTED THESE TO A VOTE SO THAT YOU MIGHT DECIDE FOR YOURSELVES WHICH WATER SYSTEM YOU PREFER. Instead of this they are trying with undue zeal to commit the city to the Hetch-Hetchy project, whether or no.
The question is put straight up to you, Mr. Voter, and you can not evade it-VOTE AGAINST THE HETCH-HETCHY PROJECT AND BONDS.
The undersigned have no interest whatever in any source of water supply available for San Francisco, but sign this protest as citizens interested in the welfare of the city.
JOHN MUIR, J. N. LeCONTE, WM. F. BADE, E. T. PARSONS, J. K. WILSON,WM. H. CROCKER, JAS. R. KELLY, WM. E. COLBY, E. R. LILIENTHAL, R. M. HOTALING,LEON SLOSS, WILLIAM THOMAS, R. M. TOBIN. J. D. GRANT, JOHN HERMANN,