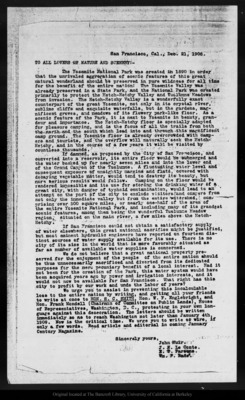 TO ALL LOVERS OF NATURE AND SCENERY:-

The Yosemite National Park was created in 1890 in order that the unrivaled aggregation of scenic features of this great natural wonderland should be preserved in pure wildness for all time for the benefit Of the entire nation: the Yosemite Valley was already preserved in a State Park, and the National Park was created primarily to protect the Hetch-Hetchy Valley and Tuolumne Meadows from invasion. The Hetch-Hetchy Valley is a wonderfully exact counterpart of the great Yosemite, not only in its crystal river, sublime cliffs and exquisite waterfalls, but in the gardens, magnificent groves, and meadows of its flowery park-like floor. As a scenic feature of the Park, it is next to Yosemite in beauty, grandeur and importance. The Hetch-Hetchy floor is specially adapted for pleasure camping, and is the focus of all the trails from both the north and the south which lead into and through this magnificent camp ground. The Yosemite floor is already overcrowded with campers and tourists, the overflow will naturally seek the Hetch-Hetchy, and in the course of a few years it will be visited by countless thousands.
If damned, as proposed by the City of San Francisco, and converted into a reservoir, its entire floor would be submerged and the water backed up for nearly seven miles and into the lower end of the Grand Canyon of the Tuolumne. A fluctuating water level and consequent exposure of unsightly margins and flats, covered with decaying vegetable matter, would tend to destroy its beauty, but more serious results would follow. Camping on the floor would be rendered impossible and its use for storing the drinking water of a great city, with danger of typhoid contamination would lead to an attempt on the part Of the city to exclude visitors and campers from not only the immediate valley but from the entire watershed, comprising over 500 square miles, or nearly one-half or the area of the entire Yosemite National Park, and including many of its grandest scenic features, among them being the wonderful Tuolumne Meadow region; situated on the main river, a few miles above the Hetch-Hetchy.
If San Francisco could not obtain a satisfactory supply of water elsewhere, this great national sacrifice might be justified, but most eminent hydraulic engineers have reported on fourteen distinct sources of water supply available for its use. There is no city of its size in the World that is more favorably situated as far as number of available water supplies is concerned.
We do not believe that a great national property preserved for the enjoyment of the people of the entire nation should be thus unnecessarily sacrificed and diverted from its dedicated purposes for the mere pecuniary benefit of a local interest. Had it not been for the creation of the Park, this water system would have been acquired years ago by power and irrigation interests, and it would not now be available for San Francisco. What right has this city to profit by our work and undo the labor of years?
We urge you to assist in preventing this incalculable loss to the entire nation by writing, and getting all your friends to write at once to HON. S. C. SMITH, Hon. W. P. Englebright, and Hon. Frank Mondell (Chairman of Committee on Public Lands), House of Representatives, Washington, D. C, protesting in your own language against this desecration. The letters should be written immediately so as to reach Washington not later than January 4th, 1909. Now is the critical time. We urge you to write or wire, if only a few words. Read article and editorial in coming January Century Magazine.