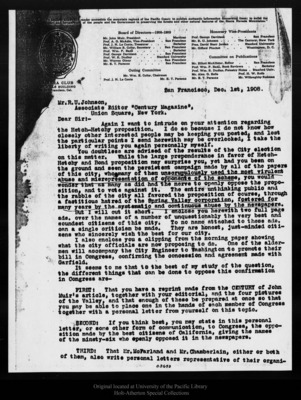 To explore, enjoy, and render accessible the mountain regions of the Pacific Coast: to publish authentic information concerning them: to enlist the support and cooperation of the people and the Government in preserving the forests and other natural features of the Sierra Nevada Mountains."

Dear Sir:-Again I want to intrude on your attention regarding the Hetch-Hetchy proposition. I do so because I do not know how closely other Interested people nay be keeping you posted, and lest the particular points I send herewith nay be overlooked, I take the liberty of writing you again personally myself.
You doubtless are advised of the results of the City election on this matter. While the large proposition in favor of Hetch-Hetchy and Bond proposition may surprise you, yet had you been on the ground and seen the persistent campaign made by all of the papers of this city| who many of them unscrupulously used the most virulent abuse and misrepresentation of opponents of the scheme, you would wonder that as many as did had the nerve to openly oppose the proposition, and to vote against it. The entire unthinking public and the rabble of the city all favored the proposition of course, through a factitious hatred of the Spring Valley corporation, fostered for many years by the systematic and continuous abuse by the newspapers.
-But I will cut it short. I enclose you herewith two full page ads. over the names of a number of unquestionably the very best and soundest citizens of this city. To no name attached to those ads. can a single criticism be made. They are honest, Just-minded citizens who sincerely wish the best for our city.
I also enclose you a clipping from the morning paper showing what the city officials are now proposing to do. One of the aldermen will accompany the City Engineer to Washington to promote their bill in Congress, confirming the concession and agreement made with Garfield.
It seems to me that to the best of my study of the question, the different things that can be done to oppose this confirmation in Congress are-
FIRST: That you have a reprint made from the CENTURY of John Muir's article, together with your editorial, and the four pictures of the Valley, and that enough of these be prepared at once so that you may be able to place one in the hands of each member of Congress together with a personal letter from yourself on this topic.
SECOND: If you think best, you may state in this personal letter, or some other form of communication, to Congress, the opposition made by the best citizens of California, giving the names of the ninety-six who openly opposed it in the newspapers.

THIRD: That Mr. Mofarland and Mr. Chamberlain, either or both of them, also write personal letters representative of their organic