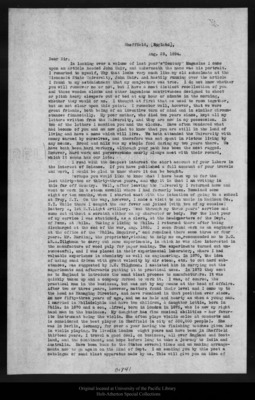 Sheffield, [England],August, 29, 1894. Dear Sir: In looking over a volume of last year's "Century" Magazine I came upon an article headed John Muir, and underneath the name was his portrait. I remarked to myself, Why that looks very much like my old schoolmate at theWisconsin State University, John Muir. And hastily running over the articleI found to my astonishment that my conjecture was true. I do not know whether you will rememver me or not, but I have a most distinct recollection of you and those wooden clocks and other ingenious contrivances designed to shoot or pitch heavy sleepers out of bed at any hour or minute in the morning, whether they would or no. I thought at first that we used to room together, but am not clear upon this point. I remember well, however, that we were great friends, both being of an inventive turn of mind and in similar circumstances financially. My poor mother, who died two years since, kept all my letters written from the University, and they are now in my possession. In two of the letters I mention you and the clocks. Have often wondered what had become of you and am now glad to know that you are still in the land of living and have a name which will live. We both attended the University with money earned by ourselves, and therefore was not spent in riotous living by any means. Bread and milk was my staple food during my two years there. We have both been hard workers, although your path has been the most rugged. However, hard work and perseverance nearly always meet with their reward, which it seems has our lots. I read with the deepest interest the short account of your labors in the interest of Science. If you have published a full account of your travels and work, I would be glad to know where it can be bought. Perhaps you would like to know ./hat I have been up to for the last thirty-two or thirty-three years, and why it is that I am writing in this far off country. Well, after leaving the University I returned home and went to work in a steam sawmill where I had formerly been. Remained some eight or ten months, when I started east with the intention of going to a school at Troy, NY. On the way, however, I mad(c) a visit to an uncle in Madison Co., N.Y. While there I caught the war fever and joined (with two of my cousins) Battery A, 1st N.Y. Light Artillery. Went through my three years' service and came out without a scratch either on my character or body. For the last year of my service I was stationed, as a clerk, at the headquarters of the Dept. of Penn. at Phila. Taking a liking to Phila. I returned there after being discharged at the end of the war, Aug. 1865. I soon found work as an engineer at the office of the Phila. Enquirer," and remained there some three or four years. Mr. Harding, the proprietor,wishing to help me on,recommended me to B.C.&R.A Tilghman to carry out some experiments, in which he was also interested in the manufacture of wood pulp for paper making. The experiments turned out unsuccessful, and I was placed in their experimental laboratory, where I had valuable experience in chemistry as well as engineering. In 1870, the idea of using sand driven with great velocity by air steam, etc. to cut hard substances, was suggested by B.C. Tilghman. I assisted him in carrying out the experiments and afterwards putting it to practical uses. In 1873 they sent me to England to introduce the sand blast process to manufacturers. It was quickly taken up and a company formed to work it. I was, of course, the practical man in the business, but was not by any means at the head of affairs. After two or three years, however, matters found their level and I came up to the head as Managing Director, and have remained in that position ever since. Am now fifty-three years of age, and am as hale and hearty as when a young man. I married in Philadelphia and have two children, a daughter Lottie, born in Phila. in 1870 and a son, Alfred, born in London in 1875, who is now my right hand man in the business. My daughter has fine musical abilities - her favorite instrument being the violin. She often plays violin solos at concerts and is considered the best player in Sheffield (a city of 350,000 people). She was in Berlin, Germany, for over a year having the finishing touches given her in violin playing. We livedin London eight years and have been in Sheffield thirteen years. I travel a good deal, on business, all over England and Scotland, and the continent, and hope before long to take a journey to India and Australia. Have been back to the States several times and am making arrangements now to go again on the 22nd of Sept. I am sending you by this post a catalogue of sand blast apparatus made by us. This will give you an idea of01841