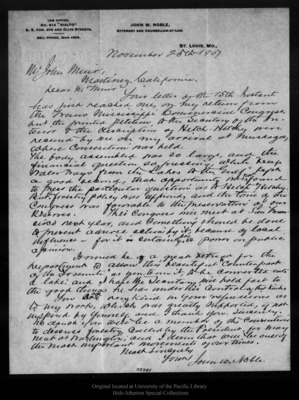 [letterhead]ST. LOUIS, MO.,November 25th 1907Mr John Muir,Martinez, California.Dear Mr MuirYour letter of the 15th Instant has just reached me on my return from the Trans Mississippi Commercial Congress. and the printed petition to the Secretary of the Interior & the description of Hetch-Hetchy were received by me on my arrival at Muskogee, where convention was held.The body assembled was so large, and the financial question so pressing, which "keeps water ways from the Lakes to the [illegible]" kept a good second, that opportunity was not found to press the particular question as to Hetch Hetchy. But the forestry policy was approved and the tone of the Congress was favorable to the preservation of our Reserves. This Congress will meet at San Francisco next year, and something should be done to prevent adverse action by it, because of local influence - for it certainly has power on public opinion.It would be a great [illegible] for the Department to allow this beautiful "Counter park of the Yosemite" as you term it, to be [converted?] into a lake: and I hope the Secretary will hold fast to the good things he has under his control of that kind.You are very kind in your expressions as to my work, which was greatly supported, if not inspired by yourself, and I thank you. Sincerely. No doubt you will be a member of the convention to discuss forestry, called by the President, for May next at Washington; and I deem that will be one of the most important movements of our times.Most SincerelyYoursJohn W. Noble.03981