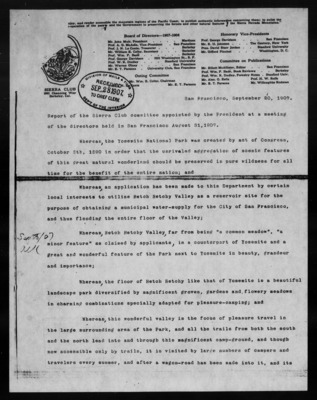 njoy, and render accessible the mountain regions of the Pacific Coast: to publish authentic information concerning them: to enlist the co-operation of the people and the Government in preserving the forests and other natural [illegible] the Sierra Nevada Mountains." Board of Directors --- 1907-1908Mr. John Muir President . . . . MartinezProf. A. G. McAdie, Vice-President . San FranciscoProf. J. N. Le Conte, Treasurer . . . BerkeleyMr. William E. Colby, Secretary . . . BerkeleyProf. Wm. F. Badè . . . . . BerkleyProf. George Davidson . 2221 Washington St., S. F. Prof. W. R. Dudley . . . Stanford UniversityMr. Warren Olney . . . . . San FranciscoMr. E. T. Parsons . University Club, San FranciscoOuting CommitteeMr. Wm. E. Colby, ChairmanConte Mr. E. T. ParsonsHonorary Vice-PresidentsProf. George Davidson . . . San FranciscoMr. R. U. Johnson . . . The Century, New YorkPres. David Starr Jordan . . Stanford UniversityMr. Gifford Pinchot . . . Washington, D. C. Committee on PublicationsMr. Elliot McAllister, Editor . . San FranciscoProf. Wm. F. Badè, Book Reviews . . BerkleyProf. Wm. R. Dudley, Forestry Notes . Stanford Univ.Mr. Alex. G. Elles Prof. H. W. RoiseMr. E. T. Parsons Mr. Willoughby RodmanSIERRA CLUB2901 Channing WayBerkley, Cal. San Francisco, September 20, 1907. Report of the Sierra Club committee appointed by the President at a meeting of the directors held in San Francisco August 31, 1907. Whereas, the Yosemite National Park was created by act of Congress, October 8th, 1S90 in order that the unrivaled aggregation of scenic features of this great natural wonderland should be preserved in pure wildness for all time for the benefit of the entire nation; andWhereas, an application has been made to this Department by certain local interests to utilize Hetch Hetchy Valley as a reservoir site for the purpose of obtaining a municipal water-supply for the City of San Francisco, and thus flooding the entire floor of the Valley; Whereas, Hetch Hetchy Valley, far from being "a common meadow", "a minor feature" as claimed by applicants, is a counterpart of Yosemite and a great and wonderful feature of the Park next to Yosemite in beauty, grandeur and importance; Whereas, the floor of Hetch Hetchy like that of Yosemite is a beautiful landscape park diversified by magnificent groves, gardens and flowery meadows in charming combinations specially adapted for pleasure-camping; and Whereas, this wonderful valley is the focus of pleasure travel in the large surrounding area of the Park, and all the trails from both the south and the north lead into and through this magnificent camp-ground, and though now accessible only by trails, it is visited by large numbers of campers and travelers every summer, and after a wagon-road has been made into it, and its