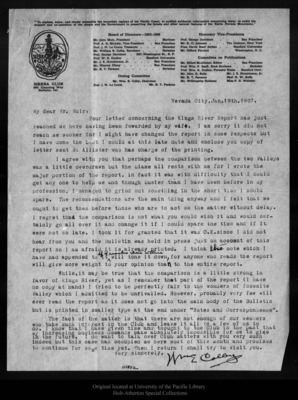 "To explore, enjoy, and render accessible the mountain regions of the Pacific Coast; to publish authentic information concerning- them; to enlist the support and co-operation of the people and the Government in preserving the forests and other natural features of the Sierra Nevada Mountains."Board of Directors-1905-1906Mr. John Muir, President MartinezProf. A. G. McAdie, Vice-President San FranciscoProf. J. N. Le Conte, Treasurer BerkeleyMr. William E. Colby, Secretary. BerkeleyProf. George Davidson 2221 Washington St., S. F.Prof. W. R. Dudley Stanford UniversityMr. J. S. Hutchinson, Jr. San FranciscoMr. Warren Olney San FranciscoMr. E. T. Parsons BerkeleyOuting CommitteeMr. Wm. B. Colby, ChairmanProf. J. N. Le Conte Mr. E. T. ParsonsHonorary Vice-PresidentsProf. George Davidson San FranciscoMr. R. U. Johnson The Century, New YorkPres. David Starr Jordan Stanford UniversityMr. Gifford Pinchot Washington, D.C.Committee on PublicationsMr. Elliot McAllister, Editor San FranciscoProf. Wm. F. Bade, Book Reviews BerkeleyProf. Wm. R. Dudley, Forestry Notes Stanford Univ.Mr. Alex G. Eells Mr. J.S. Hutchinson, Jr.Mr. E.T. Parsons Prof. H.W. RolfeMr. Willoughby Rodman Miss F.B. WhittierSIERRA CLUB2901 Channing WayBerkeley, Cal.My dear Mr.Nevada City, Jan.19th.1907.My dear Mr. Muir:Your letter concerning the Kings River Report has Just reached me here having been forwarded by my wife. I am sorry it did not reach me sooner for I might have changed the report in some respects but I have done the best I could at this late date and enclose you copy of letter sent Mc Allister who has charge of the printing.I agree with you that perhaps the comparison between the two valleys was a little overdrawn but the blame all rests with me for I wrote the major portion of the report, in fact it was with difficulty that I could get any one to help me and though busier than I have been before in my profession, I managed to grind out something in time short time I could spare. The recommendations are the main thing anyway and I felt that we ought to get that before those who are to act on the matter without delay. I regret that the comparison is not what you would wish it and would certainly go all over it and change it if I could spare the time and if it were not so late. I took it for granted that it was O.K. since I did not hear from you and the bulletin was held in press just on account of this report so I am afraid it is already printed. I think the note which I have had appended to [illegible] will tone it down, for anyone who reads the report will give more weight to your opinion than to the entire report.While, it may be true that the comparison is a little strong in favor of Kings River, yet as I remember that part of the report (I have no copy at hand) I tried to be perfectly fair to the wonders of Yosemite Valley which I admitted to be unrivalled. However, probably very few will ever read the report as it does not go into the main body of the Bulletin but is printed in smaller type at the end under "Notes and Correspondence".The fact of the matter is that there are not enough of our members who take much interest in the Club and leave it all to a few of us to do. I know that I have given time and thought to the Club in the past that my increasing business demands make absolutely impossible for me to give in the future. I do want to talk over Club matters with you very much indeed but this case has occupied me here most of this month and promises to continue for some time yet. When I return I shall try to visit you.Very sincerely,[illegible],br>03822