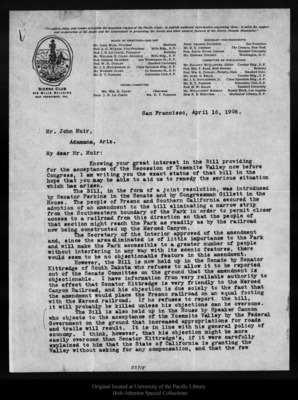 "To explore, enjoy, and render accessible the mountain regions of the Pacific Coast; to publish authentic information concerning them; to enlist the support and co-operation of the people and the Government in preserving the forests and other natural features of the Sierra Nevada Mountains."SIERRA CLUB316 MILLS BUILDINGSAN FRANCISCO, CAL.BOARD OF DIRECTORS-1905-1906Mr. JOHN MUIR, President MartinezProf. A. G. MCADIE, Vice-President Mills Bidg., S. F. Prof. J. N. LECONTE, Treasurer . . . BerkeleyMr. WILLIAM E. COLEY, Secretary . Mills Bidg., S. F.Prof. GRORGE DAVIDSON 2221 Washington St., S. F.Prof. W.R. DUDLEY Standford UniversityMr. J. S. HUTCHINSON, Jr. Claus Spreckels Bidg., S. F.Mr. WARREN OLNEY 101 Sansome St., S. F.Mr. E. T. PARSONS University Club, S. F.OUTING COMMITTEEMr. WM. E. COLBY ChairmanPROF. J. N. LE. CONTE MR. E. T. PARSONSHONORARY VICE-PRESIDENTSPROF. GEORGE DAVIDSON . . . San FranciscoMr. R. U. JOHNSON . The Century, New YorkPres. DAVID STARR JORDAN . Stanford University Mr. GIFFORD PINCHOT . . . Washington, D. C.COMMITTEE ON PUBLICATIONSMr. ELLIOTT MCALLISTER, Editor Crocker Bldg., S. F.Prof. WM. F. BADÉ, Book Reviews ... BerkeleyProf. WM. R. DUDLEY, Forestry Notes . Stanford Univ.Mr. ALEX. G. EELLS . . . Crocker Bldg., S. F.Mr. J. S. HUTCHINSON, Jr. Claus Spreckels Bldg., S. F.Mr. E. T. PARSONS . . . University Club, S. F.Prof. H. W. ROLFE . Stanford UniversityMr. WILLOUGHBY RODMAN Bryson Block, Los AngelesMiss F. B. WHITTIER Mechanics' Library, S. F.San Francisco, April 16, 1906.Mr. John Muir,Adamana, Ariz.My dear Mr. Muir:Knowing your great interest in the Bill providing for the acceptance of the Recession of Yosemite Valley now before Congress, I am writing you the exact status of that bill in the hope that you may be able to aid us to remedy the serious situation which has arisen.The Bill, in the form of a joint resolution, was introduced by Senator Perkins in the Senate and by Congressman Gillett in the House. The people of Fresno and Southern California secured the adoption of an amendment to the bill eliminating a narrow strip from the Southwestern boundary of the Park in order to permit closer access to a railroad from this direction so that the people of that section might reach the Park as readily as by the railroad now being constructed up the Merced Canyon.The Secretary of the Interior approved of the amendment and, since the area eliminated is of little importance to the Park and will make the Park accessible to a greater number of people without interfering in any way with its scenic features, there would seem to be no objectionable feature in this amendment.However, the Bill is now held up in the Senate by Senator Kittredge of South Dakota who refuses to allow it to be reported out of the Senate Committee on the ground that the amendment is objectionable. I have information from very reliable authority tothe effect that Senator Kittredge is very friendly to the Merced Canyon Railroad, and his objection is due solely to the fact that the amendment would place the Fresno railroad on an equal footing with the Merced railroad. If he refuses to report, the bill, it will probably be killed unless his objections can be overcome.The Bill is also held up in the House by Speaker Cannon who objects to the acceptance of the Yosemite Valley by the Federal Government on the ground that increased appropriations for roads and trails will result. It is in line with his general policy of economy. I think, however, that his objection might be more easily overcome than Senator Kittredge's, if it were carefully explained to him that the State of California is granting the Valley without asking for any compensation, and that the few03718