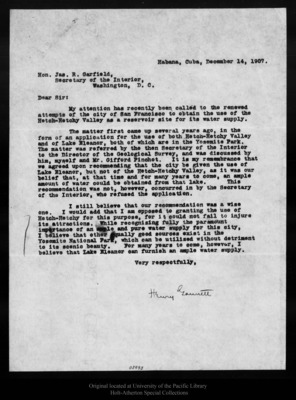 Habana, Cuba, December 14, 1907.Hon. Jas. R. Garfield,Secretary of the Interior,Washington, D. C.Dear Sir:My attention has recently been called to the renewed attempts of the city of San Francisco to obtain the use of the Hetch-Hetchy Valley as a reservoir site for its water supply.The matter first came up several years ago, in the form of an application for the use of both Hetch-Hetchy Valley and of Lake Eleanor, both of which are in the Yosemite Park. The matter was referred by the then Secretary of the Interior to the Director of the Geological Survey, and was discussed by him, myself and Mr. Gifford Pinchot. It is my remembrance that we agreed upon recommending that the city be given the use of Lake Eleanor, but not of the Hetch-Hetchy Valley, as it was our belief that, at that time and for many years to come, an ample amount of water could be obtained from that lake. This recommendation was not, however, concurred in by the Secretary of the Interior, who refused the application.I still believe that our recommendation was a wise one. I would add that I am opposed to granting the use of Hetch-Hetchy for this purpose, for it could not fail to injure its attractions. while recognizing fully the paramount importance of an ample and pure water supply for this city, I believe that other equally good sources exist in the Yosemite National Park, which can be utilized without detriment to its scenic beauty. For many years to come, however, I believe that Lake Eleanor can furnish an ample water supply.Very respectfully,[illegible]03993