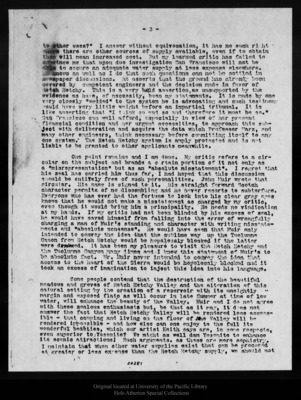 -3-to other uses?" I answer without equivocation, it has no such right where there are other sources of supply available, even if to obtain them will mean increased cost. But my learned critic has failed to convince me that upon due investigation San Francisco will not be able to secure an adequate water supply at less expense elsewhere. He knows as well as I do that such questions can not to settled in newspaper discussions. He asserts that the ground has already been covered by competent engineers and the decision made in favor of Hetch Hetchy. This is a very bold assertion, as unsupported by the evidence as have, of necessity, been my statements. It is made by one very closely "wedded" to the system he is advocating and such testimony would have very little weight before an impartial tribunal. It is like asserting that "I think so and so and therefore it must be so." San Francisco can well afford, especially in view of her present financial condition and her urgent necessities, to approach this subject with deliberation and acquire the data which Professor Marx, and many other engineers, think necessary before committing itself to any one system. The Hetch Hetchy system is amply protected and is not liable to be granted to other applicants meanwhile. One point remains and I am done. My critic refers to a circular on the subject and brands a certain portion of it not only as a "misrepresentation" but as an "absolute misstatement". I regret that his zeal has carried him thus far, I had hoped that this discussion should be entirely free of such personalities. John Muir wrote that circular. His name is signed to it. His straight forward Scotch character permits of no dissembling and he never resorts to subterfuge. Everyone who has ever had the fortune to look into his clear gray eyes knows that he would not make a misstatement as charged by my critic, even though it would bring him a principality. He needs no vindication at my hands. If my critic had not been blinded by his excess of zeal, he would have saved himself from falling into the error of wrongfully charging a man of Muir's standing and character with writing misstatements and "absolute nonsense". He would have seen that Muir only intended to convey the idea that the sublime way up the Tuolumne Canon from Hetch Hetchy would be hopelessly blocked if the latter were dummied. It has been my pleasure to visit the Hetch Hetchy and the Tuolumne Canyon many times and I know this statement of Muir's to be absolute fact. Mr. Muir never intended to convey the idea that access to the heart of the Sierra would be hopelessly blocked and it took an excess of imagination to inject this idea into his language. Some people contend that the destruction of the beautiful meadows and groves of Hetch Hetchy Valley and the alteration of this natural setting by the creation of a reservoir with its unsightly margin and exposed flats as will occur in late Summer at time of low water, will enhance the beauty of the Valley. Muir and I do not agree with these zealous enthusiasts but, be that as it may, it does not answer the fact that Hetch Hetchy Valley will be rendered less accessible - that camping and living on the floor of the Valley will be rendered impossible - and how else can one enjoy to the full its wonderful beauties, which our artist Keith says are, in some respects, even superior to Yosemite? We might as well dam Yosemite to enhance its scenic attractions! Such arguments, as these are mere sophistry. I maintain that when other water supplies exist that can be procured at greater or less expense than the Hetch Hetchy supply, we should not06281