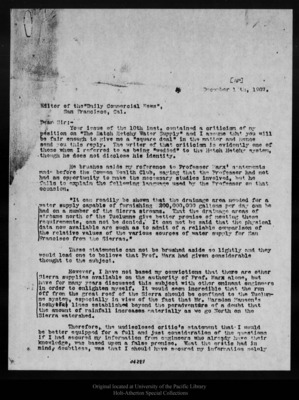 [16th]December 1[illegible]th, 1907.Editor of the "Daily Commercial News",San Francisco, Cal.Dear Sir:-Your issue of the 10th inst. contained a criticism of my position on "The Hatch Hetchy Water Supply" and I assume that you will be fair enough to give me a "square deal" in the matter and hence send you this reply. The writer of that criticism is evidently one of those whom I referred to as being "wedded" to the Hetch Hetchy system, though he does not disclose his identity.He brushes aside my reference to Professor [illegible]arx' statements made before the Common Health Club, saying that the Professor had not had an opportunity to make the necessary studies involved, but he fails to explain the following language used by the Professor on that occasion."It can readily be shown that the drainage area needed for a water supply capable of furnishing 200,000,000 gallons per day can be had on a number of the Sierra streams. That the drainage areas of streams north of the Tuolumne give better promise of meeting these requirements, can not be denied. It can not be said that the physical data now available are such as to admit of a reliable comparison of the relative values of the various sources of water supply for San Francisco from the Sierras."These statements can not be brushed aside so lightly and they would lead one to believe that Prof. Marx had given considerable thought to the subject.However, I have not based my convictions that there are other Sierra supplies available on the authority of Prof. Marx alone, but have for many years discussed this subject with other eminent engineers in order to enlighten myself. It would seem incredible that the run off from the great roof of the Sierra should be confined to the Tuolumne system, especially in view of the fact that Mr. Harsdon Mannon's ischy[illegible] linen eatablished beyond the peradventure of a doubt that the amount of rainfall increases materially as we go North on the Sierra watershed.Therefore, the undisclosed critic's statement that I would be better equipped for a full and just consideration of the questions if I had secured my information from engineers who already have their knowledge, was based upon a false promise. What the critic had in mind, doubtless, was that I should have secured my information solely06281