Letter from W[illia]m Ham Hall to The Board of Directiors Turlock Irrigation District, [190]7 Aug 3.

The Board of Directiors Turlock Irrigation District 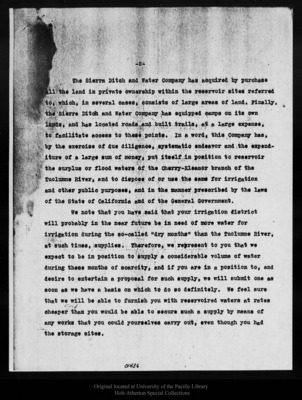 -2-The Sierra Ditch and Water Company has acquired by purchase all the land in private ownership within the reservoir sites referred to, which, in several cases, consists of large areas of land. Finally, the Sierra Ditch and Water Company has equipped camps on its own lands, and has located roads and built trails, at a large expense, to facilitate across to these points. In a word, this Company has, by the exercise of due diligence, systematic endeavor and the expenditure of a large sum of money, put itself in position to reservoir the surplus or flood waters of the Cherry-Eleanor branch of the Tuolumne River, and to dispose of or use the same for irrigation and other public purposes, and in the manner prescribed by the laws of the State of California and of the General Government.We note that you have said that your Irrigation district will probably in the near future be in need of more water for irrigation during the so-called “dry months” than the Tuolumne River, at such times, supplies. Therefore, we represent to you that we expect to be in position to supply a considerable volume of water during these months of scarcity, and if you are in a position to, and desire to entertain a proposal for such supply, we will submit one as soon as we have a basis on which to do so definitely. We feel sure that we will be able to furnish you with reservoired waters at rates cheaper than you would be able to secure such a supply by means of any works that you could yourselves carry out, even though you had the storage sites.01436