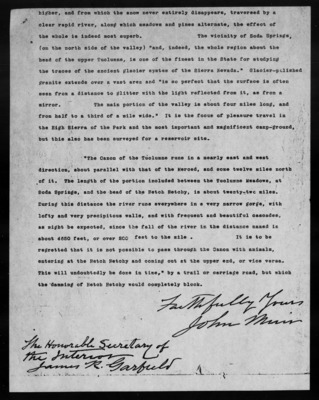 higher, and from which the snow never entirely disappears, traversed by a clear rapid river, along which meadows and pines alternate, the effect of the whole is indeed most superb. The vicinity of Soda Springs, (on the north side of the valley) "and, indeed, the whole region about the head of the upper Tuolumne, is one of the finest in the State for studying the traces of the ancient glacier system of the Sierra Nevada." Glacier-polishedgranite extends over a vast area and "is so perfect that the surface is often seen from a distance to glitter with the light reflected from it, as from a mirror. The main portion of the valley is about four miles long, and from half to a third of a mile wide." It is the focus of pleasure travel in the High Sierra of the Park and the most important and magnificent camp-ground, but this also has been surveyed for a reservoir site."The Canon of the Tuolumne runs in a nearly east and west direction, about parallel with that of the Merced, and some twelve miles north of it. The length of the portion included between the Tuolumne Meadows, at Soda Springs, and the head of the Hetch Hetchy, is about twenty-two miles. During this distance the river runs everywhere in a very narrow gorge, with lofty and very precipitous walls, and with frequent and beautiful cascades, as might be expected, since the fall of the river in the distance named is about 4650 feet, or over 200 feet to the mile. It is to be regretted that it is not possible to pass through the Canon with animals, entering at the Hetch Hetchy and coming out at the upper end, or vice versa. This will undoubtedly be done in time, " by a trail or carriage road, but which the damming of Hetch Hetchy would completely block.[illegible][illegible]