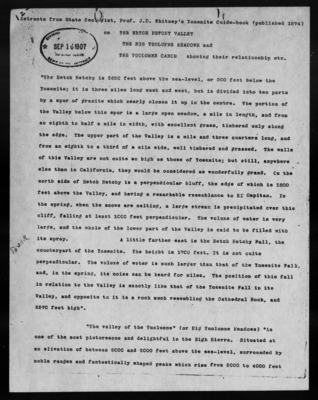 Extracts from State Goelogist Prof. J.B. Whitney's Yosemite Guide-book (published 1874)on. THE HETCH HETCHY VALLEYTHE BIG TOCLUMNE MEADOWS and THE TUOLUMNE CANCN showing their relationship etc."The HetcH Hetchy is 8650 feet above the sea-level, or 800 feet below the Yosemite; it is three miles long east and west, but is divided into two parts by a spur of granite which nearly closes it up in the centre. The portion of the Valley below this spur is a large open meadow, a mile in length, and from an eighth to half a mile in width, with excellent grass, timbered only along the edge. The upper part of the Valley is a mile and three quarters long, and from an eighth to a third of a mile wide, well timbered and grassed. The walls of this Valley are not cuite so high as those of Yosemite; but still, anywhere else than in California, they would be considered as wonderfully grand. On the north side of Hetch Hetchy is a perpendicular bluff, the edge of which is 1800feet above the Valley, and having a remarkable resemblance to [illegible] Capitan. In the spring, when the snows are melting, a large stream is precipitated ever this cliff, falling at least 1000 feet perpendicular. The volume of water is very large, and the whole of the lower part of the Valley is said to be filled with its spray. A little farther east is the Hetch Hetchy Fall, the counterpart of the Yosemite. The height is 1700 feet. It is not quite perpendicular. The volume of water is much larger than that of the Yosemite Fall, and, in the spring, its noise can be heard for miles. The position of this fall in relation to the Valley is exactly like that of the Yosemite Fall in its Valley, and opposite to it is a rock much resembling the Cathedral Rock, and 2270 feet high". "The valley of the Tuolumne" (or Big Tuolumne Meadows) "is one of the most picturesque and delightful in the High Sierra. Situated at an elivation of between 8000 and 9000 feet above the sea-level, surrounded by noble ranges and fantastioally shaped peaks which rise from 8000 to 4000 feet