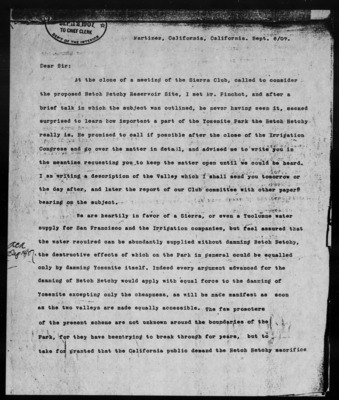 SEP 2. 1907.TO CHIEF CLERKDEPARTMENT OF THE INTERIORMartinez, California, California. Sept. 6/07.Dear Sir:At the close of a meeting of the Sierra Club, called to consider the proposed Hetch Hetchy Reservoir Site, I met Mr. Pinchot, and after a brief talk in which the subject was outlined, he never having seen it, seemed surprised to learn how important a part of the Yosemite Park the Hetch Hetchy really is. He promised to call if possible after the close of the Irrigation Congress and go over the matter in detail, and advised me to write you in the meantime requesting you to keep the matter open until we could be heard. I am writing a description of the Valley which I shall send you tomorrow or the day after, and later the report of our Club committee with other papers bearing on the subject.We are heartily in favor of a Sierra, or even a Tuolumne water supply for San Francisco and the Irrigation companies, but feel assured that the water required can be abundantly supplied without damming Hetch Hetchy, the destructive effects of which on the Park in general could be equalled only by damming Yosemite itself. Indeed every argument advanced for the damming of Hetch Hetchy would apply with equal force to the damming of Yosemite excepting only the cheapness, as will be made manifest as soon as the two valleys are made equally accessible. The few promoters of the present scheme are not unknown around the boundaries of the Park, for they have been trying to break through for years, but to take for granted that the California public demand the Hetch Hetchy sacrifice