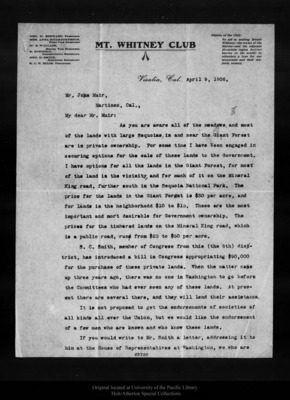 GEO. W. STEWART, PRESIDENT. MRS. ANNA MILLS JOHNSTON,FlRST VlCE PRESIDENTW. B. WALLACE,SECOND VICEPRESIDENT.S. MITCHELL,CORRESPONDING SECRETARY.GEO. D. SMITH,RECORDING SECRETARY.S. L. N. ELLIS, TREASURER,MT. WHITNEY CLUBObject of the Club:To aid in making Mount Whitney-the crown of the Sierras-and the adjacent Mountain region better known to the world; to stimulate a love for our mountains and their majestic scenery.Visalia, Cal. April 9, 1906.Mr, John Muir,Martinez, Cal., My dear Mr. Muir:As you are aware all of the meadows, and most of the lands with large Sequoias, in and near the Giant Forest are in private ownership. For some time I have been engaged in securing options for the sale of these lands to the Government. I have options for all the lands in the Giant Forest, for most of the land in the vicinity, and for much of it on the Mineral King road, further south in the Sequoia National Park. The price for the lands in the Giant Forest is $30 per acre, and for lands in the neighborhodd $10 to $15. These are the most important and mort desirable for Government ownership. The prices for the timbered lands on the Mineral King road, which is a public road, run from $25 to $50 per acre.S. C. Smith, member of Congress from this (the 8th) district, has introduced a bill in Congress appropriating $90,000 for the purchase of these private lands. When the matter came up three years ago, there was no one in Washington to go before the Committees who had ever seen any of these lands. At present there are several there, and they will lend their assistance.It is not proposed to get the endorsements of societies of all kinds all over the Union, but we would like the endorsement of a few men who are known and who know these lands.If you would write to Mr. Smith a letter, addressing it to him at the House of Representatives at Washington, we who are03720