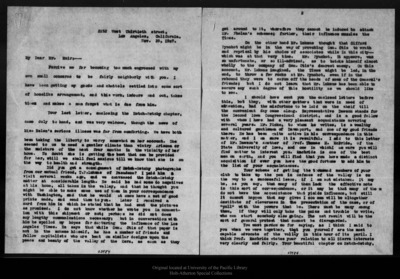 2252 West Thirtieth street.Los Angeles, California,NOV. 29, 1907.My Dear Mr. Muir:-Forgive me for becoming too much engrossed with my own small concerns to be fairly neighborly with you. I have been getting my goods and chattels settled into some sort of homelike arrangement, and this work, indoors and out, takes times and makes a man forget what is due from him.Your last letter, enclosing the Hetch-Hetchy chapter, came duly to hand, and was very welcome, though the news of Miss Helen's serious illness was far from comforting. We have both been taking the liberty to worry somewhat on her account. She seemed to us to need a gentler climate than wintry Arizona or the moisture of the next four months in the vicinity of her home. No doubt she is getting the best that can be provided for her, still we shall feel anxious till we know that she is on the way to health and strength.Did you get a consignment of Hetch-Hetchy photographs from our mutual friend, T. P. Lukens of Pasadena? I paid him a visit several weeks ago, and we canvassed the Hetch-Hetchy matter at considerable length. He said he had some 60 negatives at his home, all taken in the valley, and that he thought yon might be able to make some use of them in your correspondence with Washington, and that he would at once have a set of good prints made, and send them to you. Later I received a card from him in which he stated that he had sent the pictures as promised. I do not know whether he wrote you in connection with this shipment or not; perhaps he did not deem any lengthy communications necessary; but in conversation with him he spoiled my hopes for capturing the influence of the Los Angeles Times. He says that while Gen. Otis of that paper is not in the scheme himself, he has a number of friends and fellow capitalists who are bent on similar designs upon the peace and beauty of the valley of the Kern, as soon as they get around to it, wherefore they cannot be induced to attack Mr. Phelan's schemes; further, their influence mussles the Times.On the other hand Mr. Lukens thought that Gifford Pynchot might be in the way of provoking Gen. Otis to wrath and reprisal by his choice of associates while in this city- which was at that very time. Mr. Pynchot, it appears, was so unfortunate, or so ill-advised, as to betake himself almost wholly to the company of Gen. Otis's dearest enemy. On this account, Mr. Lukens imagined, the Times might be led, in the end, to throw a few rocks at Mr. Pynchot, even if in the rebound they were to carom off the heads of some of the General's friends; but I do not learn that Mr. Lukens has been able to secure any such degree of this hostility as we should like to see.I should have sent you the enclosed letters before this, but they, with other matters that were in need of attention, had the misfortune to be laid on the shelf till the convenient day came along. Representative Dawson stands for the Second Iowa Congressional district, and is a good fellow with whom I have had a very pleasant acquaintance covering several years. Mr. Ficke, to whom he writes, is a wealthy and cultured gentleman of Davenport, and one of my good friends there. He has been quite active in his correspondence in this matter, and I am sure it is resultful. I add to this letter of Mr. Dawson's another of Prof. Thomas H. McBride, of the State University of Iowa, and one in which I am sure you will find matter to interest you. Macbride is one of the best men on earth, and you will find that you have made a distinct acquisition if ever you have the good fortune to add him to the list of your acquaintances.Your scheme of getting the thousand members of your club to take up the pen in defense of the valley is on the way to a successful issue, if I am not mistaken. It may; be, as you say, that many of them lack the effective note in this sort of correspondence, or it may be that many of them do not have the acquaintance that yields influence, but still it cannot happen that any given I [illegible] men will be altogether destitute of cleverness in the presentation of the case, or of "pull" with the powers that be. There must be many among them, if they will only take the pains and trouble to write, who can start somebody else going. The net result will be the sort of general pretest that cannot be disregarded.You must pardon me for saying, as I think I said to you when we were together, that you yourself are the most capable advocate of the valley in this hour of its peril. I think Prof. Macbride states your relation to all Sierra interests very clearly and fairly. Your beautiful chapter on Hetch-Hetchy,03984