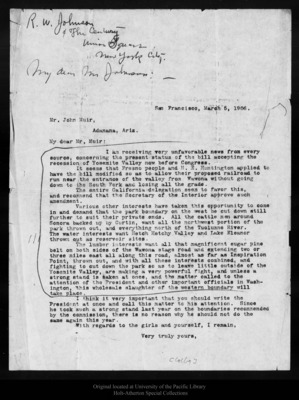 [illegible]San Francisco, March 5, 1906.Mr. John Muir,Adamana, Ariz.My dear Mr. Muir:I am receiving very unfavorable news from every source, concerning the present status of the bill accepting the recession of Yosemite Valley now before Congress.It seems that Fresno people and H. S. Huntington applied to have the bill modified so as to allow their proposed railroad to run near the entrance of the valley from Wawona without going down to the South Fork and losing all the grade .The entire California delegation seem to favor this, and recommend that the Secretary of the Interior approve such amendment.Various other interests have taken this opportunity to come in and demand that the park boundary on the west be cut down still further to suit their private ends. All the cattle men around Sonora backed up by Curtin, want all the northwest portion of the park thrown out, and everything north of the Tuolumne River. The water interests want Hetch Hetchy Valley and Lake Eleanor thrown out as reservoir sites.The lumber interests want all that magnificent sugar pine belt on both sides of the Wawona stage road and extending two or three miles east all along this road, almost as far as Inspiration Point, thrown out, and with all these interests combined, and fighting to cut down the park so as to leave little outside of the Yosemite Valley, are making a very powerful fight, and unless a strong stand is taken at once, and the matter called to the attention of the President and other important officials in Washington, this wholesale slaughter of the western boundary willtake place . I think it very important that you should write the President at once and call this matter to his attention. Since he took such a strong stand last year on the boundaries recommended by the commission, there is no reason why he should not do the same again this year.With regards to the girls and yourself, I remain,Very truly yours,