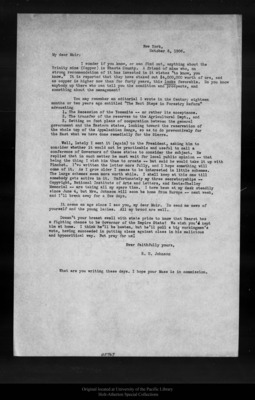 New York,October 8, 1906.My dear Muir:I wonder if you know, or can find out, anything about the Trinity mine (Copper) in Shasta County. A friend of mine who, on strong recommendation of it has invested in it wishes "to know, you know." It is reported that they have staked out $4,000,000 worth of ore, and as copper is higher now than for forty years, this looks favorable. Do you know anybody up there who can tell you the condition and prospects, and something about the management?You may remember an editorial I wrote in the Century eighteen months or two years ago entitled "The Next Steps in Forestry Reform" advocating1.The Recession of the Yosemite -- or rather its acceptance.2.The transfer of the reserves to the Agricultural Dept., and3.Setting on foot plans of cooperation between the generalgovernment and the Eastern states, looking toward the reservation ofthe whole top of the Appalachian Range, so as to do preventively forthe East what we have done remedially for the Sierra.Well, lately I sent it (again) to the President, asking him to consider whether it would not be practicable and useful to call a conference of Governors of these states to consider the subject. He replied that in such matter he must wait for local public opinion -- that being the thing I wish him thus to create -- but said he would take it up with Pinchot. I've written the latter more fully, and I hope something will come of it. As I grow older I cease to be interested in little schemes. The large schemes seem more worth while. I shall keep at this one till somebody gets active in it. Unfortunately my three secretaryships -- Copyright, National Institute of Arts and Letters, and Keats-Shelley Memorial -- are taking all my spare time. I have been at my desk steadily since June 4, but Mrs. Johnson will soon be home from Europe -- next week, and I'll break away for a few days.It seems an age since I saw you, my dear Muir. Do send me news of yourself and the young ladies. All my brood are well.Doesn't your breast swell with state pride to know that Hearst has a fighting chance to be Governor of the Empire State? We wish you 'd kept him at home. I think he'll be beaten, but he'll poll a big workingmen's vote, having succeeded in putting class against class in his malicious and hypocritical way. But pray for us ! Ever faithfully yours,R. U. JohnsonWhat are you writing these days. I hope your Muse is in commission. 03767