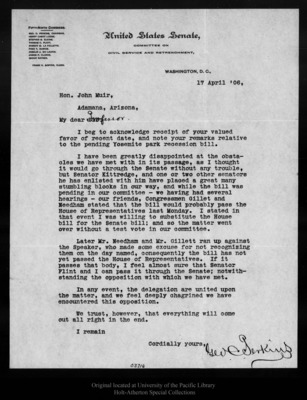 FIFTY-NINTH CONGRESS. GEO. C. PERKINS, CHAIRMAN.HENRY CABOT LODGE. STEPHEN B. ELKINS. THOMAS C. PLATT.ROBERT M. LA FOLLETTE. FRED T. DUBOIS. ANSELM J. MC LAURIN. JAMES P. CLARKE. ISIDOR RAYNER.FRANK H. SAWYER, CLEAK,United Stated Senate, COMMITTEE ON CIVIL SERVICE AND RETRENCHMENT, WASHINGTON, D. C,17 April '06,Hon. John Muir,Adamana, Arizona,My dear [illegible]I beg to acknowledge receipt of your valued favor of recent date, and note your remarks relative to the pending Yosemite park recession bill.I have been greatly disappointed at the obstacles we have met with in its passage, as I thought it would go through the Senate without any trouble, but Senator Kittredge, and one or two other senators he has enlisted with him have placed a great many stumbling blocks in our way, and while the bill was pending in our committee -- we having had several hearings -- our friends, Congressmen Gillet and Needham stated that the bill would probably pass the House of Representatives last Monday. I stated in that event I was willing to substitute the House bill for the Senate bill; and so the matter went over without a test vote in our committee.Later Mr. Needham and Mr. Gillett ran up against the Speaker, who made some excuse for not recognizing them on the day named, consequently the bill has not yet passed the House of Representatives. If it passes that body, I feel almost sure that Senator Flint and I can pass it through the Senate; notwithstanding the opposition with which we have met.In any event, the delegation are united upon the matter, and we feel deeply chagrined we have encountered this opposition.We trust, however, that everything will come out all right in the end.I remainCordially yours,[illegible]03716