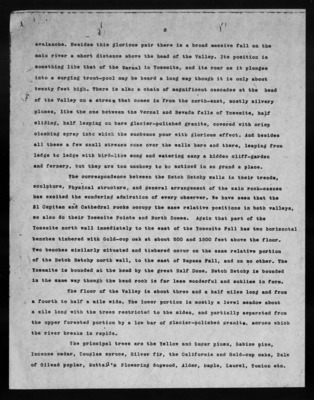 3 avalanche. Besides this glorious pair there is a broad massive fall on the main river a short distance above the head of the Valley. Its position is something like that of the Vernal in Yosemite, and its roar as it plunges into a surging trout-pool may be heard a long way though it is only about twenty feet high. There is also a chain of magnificent cascades at the head of the Valley on a stream that comes in from the north-east, mostly silvery plumes, like the one between the Vernal and Nevada falls of Yosemite, half sliding, half leaping on bare glacier-polished granite, covered with crisp clashing spray intc which the sunbeams pour with glorious effect. And besides all these a few small streams come over the walls here and there, leaping from ledge to ledge with bird-like song and watering many a hidden cliff-garden and fernery, but they are too unshowy to be noticed in so grand a place.The correspondence between the Hetch Hetchy walls in their trends, sculpture, Physical structure, and general arrangement of the main rock-masses has excited the wondering admiration of every observer. We have seen that the E1 Capitan and Cathedral rocks occupy the same relative positions in both valleys so also do their Yosemite Points and North Domes. Again that part of the Yosemite north wall immediately to the east of the Yosemite Fall has two horizontal benches timbered with Gold-cup oak at about 500 and 1500 feet above the floor. Two benches similarly situated and timbered ocrur on the same relative portion of the Hetch Hetchy north wall, to the east of Wapama Fall, and on no other. The Yosemite is bounded at the head by the great Half Dome. Hetch Hetchy is bounded in the same way though the head rock is far less wonderful and sublime in form.The floor of the Valley is about three and a half miles long and from a fourth to half a mile wide. The lower portion is mostly a level meadow about a mile long with the trees restricted to the sides, and partially separated from the upper forested portion by a low bar of glacier-polished granite, across which the river breaks in rapids.The principal trees are the Yellow and Sugar pines, Sabine pine, Incense cedar, Douglas spruce, Silver fir, the California and Gold-cup oaks, Balm of Gilead poplar, Nuttall's Flowering dogwood, Alder, Maple, Laurel, Tumion etc.