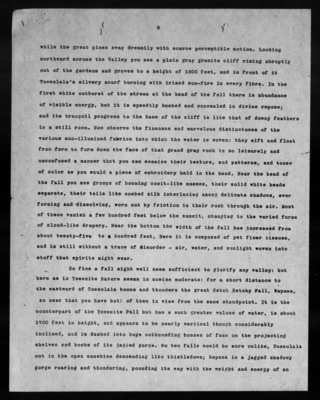 2while the great pines sway dreamily with scarce perceptible motion. Looking northward across the Valley you see a plain gray granite cliff rising abruptly out of the gardens and groves to a height of 1800 feet, and in front of it Tueeulala's silvery scarf burning with irised sun-fire in every fibre. In the first white outburst of the stream at the head of the fall there is abundance of visible energy, but it is speedily hushed and concealed in divine repose; and its tranquil progress to the base of the cliff is like that of downy feathers in a still room. Now observe the fineness and marvelous distinctness of the various sun-illumined fabrics into which the water is woven: they sift and float from form to form down the face of that grand gray rook in so leisurely and unconfused a manner that you can examine their texture, and patterns, and tones of color as you would a piece of embroidery held in the hand. Near the head of the fall you see groups of booming comit-like masses, their solid white heads separate, their tails like combed silk interlacing among delicate shadows, ever forming and dissolving, worn out by friction in their rush through the air. Most of these vanish a few hundred feet below the summit, changing to the varied forms of cloud-like drapery. Near the bottom the width of the fall has increased from about twenty-five to a hundred feet, Here it is composed of yet finer tissues, and is still without a trace of disorder - air, water, and sunlight woven into stuff that spirits might wear.So fine a fall might well seem sufficient to glorify any valley: but here as in Yosemite Nature seems in nowise moderate: for a short distance to the eastward of Tueeulala booms and thunders the great Hetch Hetchy Fall, Wapama, so near that you have both- of them in view from the same standpoint. It is the counterpart of the Yosemite Fall but has a much greater volume of water, is about 1700 feet in height, and appears to be nearly vertical though considerably inclined, and is dashed into huge outbounding bosses of foam on the projecting shelves and knobs of its jagged gorge. No two falls could be more unlike, Tueeulala out in the open sunshine descending like thistledown; Wapama in a jagged shadowy gorge roaring and thundering, pounding its way with the weight and energy of an