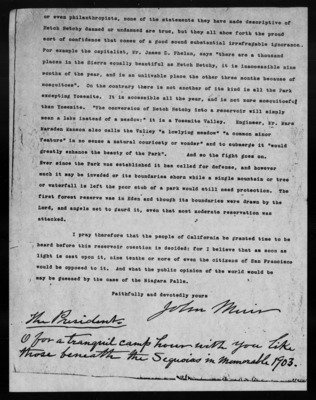 or even philanthropists, none of the statements they have made descriptive of Hetch Hetchy dammed or undammed are true, but they all show forth the proud sort of confidence that comes of a good sound substantial irrefragable ignorance. For example the capitalist, Mr. James D. Phelan, says "there are a thousand places in the Sierra equally beautiful as Hetch Hetchy, it is inaccessible nine months of the year, and is an unlivable place, the other three months because of mosquitoes". On the contrary there is not another of its kind in all the Fark excepting Yosemite. It is accessible all the year, and is not more mosquitoefu| than Yosemite. "The conversion of Hetch Hetchy into a reservoir will simply mean a lake instead of a meadow:" it is a Yosemite Valley. Engineer, Mr. Mars Marsden Manson also calls the Valley "a lowlying meadow" "a common minor feature" in no sense a natural curiosity or wonder" and to submerge it "would greatly enhance the beauty of the Park". And so the fight goes on. Ever since the Park was established it has called for defense, and however much it may be invaded or its boundaries shorn while a single mountain or tree or waterfall is left the poor stub of a park would still need protection. The first forest reserve was in Eden and though its boundaries were drawn by the Lord, and angels set to guard it, even that most moderate reservation was attacked.I pray therefore that the people of California be granted time to be heard before this reservoir question is decided: for I believe that as soon as light is cast upon it, nine tenths or more of even the citizens of San Francisco would be opposed to it. And what the public opinion of the world would be may be guessed by the case of the Niagara Falls.Faithfully and devotedly yours[illegible][illegible]