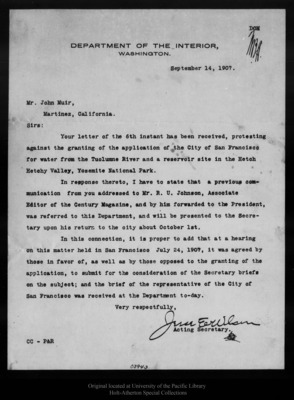 DOMDEPARTMENT OF THE INTERIOR, WASHINGTON. September 14, 1907. Mr. John Muir, Martinez, California. Sirs: Your letter of the 6th instant has been received, protesting against the granting of the application of the City of San Francisco for water from the Tuolumne River and a reservoir site in the Hetch Hetchy Valley, Yosemite National Park. In response thereto, I have to state that a previous communication from you addressed to Mr. R. U. Johnson, Associate Editor of the Century Magazine, and by him forwarded to the President, was referred to this Department, and will be presented to the Secretary upon his return to the city about October 1st. In this connection, it is proper to add that at a hearing on this matter held in San Francisco July 24, 1907, it was agreed by those in favor of, as well as by those opposed to the granting of the application, to submit for the consideration of the Secretary briefs on the subject; and the brief of the representative of the City of San Francisco was received at the Department to-day. Very respectfully, [illegible] Acting Secretary. CC - P & R03943