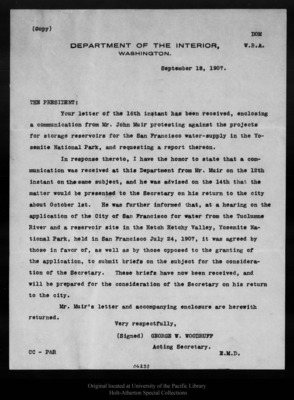 Copy)DOM DEPARTMENT OF THE INTERIOR, WASHINGTON.W. B. A.September 18, 1907.THE PRESIDENT:Tour letter of the 16th instant has been received, enclosing a communication from Mr. John Muir protesting against the projects for storage reservoirs for the San Francisco water-supply in the Yosemite National Park, and requesting a report thereon.In response thereto, I have the honor to state that a communication was received at this Department from Mr. Muir on the 12th instant on the same subject, and he was advised on the 14th that the matter would be presented to the Secretary on his return to the city about October 1st. He was further informed that, at a hearing on the application of the City of San Francisco for water from the Tuolumne River and a reservoir site in the Hetch Hetchy Valley, Yosemite National Park, held in San Francisco July 24, 1907, it was agreed by those in favor of, as well as by those opposed to the granting of the application, to submit briefs on the subject for the consideration of the Secretary. These briefs have now been received, and will be prepared for the consideration of the Secretary on his return to the city.Mr. Muir's letter and accompanying enclosure are herewith returned.Very respectfully,(Signed)GEORGE W. WOODRUFFActing Secretary.CC - P&RE.M.D.06233