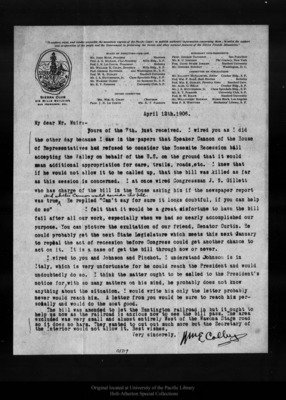 "To explore, enjoy, and render accessible the mountain regions of the Pacific Coast; to publish authentic information concerning them; to enlist the support and co-operation of the people and the Government in preserving the forests and other natural features of the Sierra Nevada Mountains."SIERRE CLUB316 MILLS BUILDINGSAN FRANCISCO, CAL.BOARD OF DIRECTORS-1905-1906Mr. JOHN MUIR, President Martinez Prof. A. G. MCADIE, Vice-President Mills Bidg., S. F.Prof. J. N. LE CONTE, Treasurer Berkeley Mr. WILLIAM E. COLBY, Secretary Mills Bidgs., S. F. Prof. GEORGE DAVIDSON 2221 Washington St., S. F.Prof. W. R. DUDLEY Stanford University Mr. J. S. HUTCHINSON, Jr. Claus Spreckels Bidg., S. F.Mr. WARREN OLNEY 101 Sansome St., S. F. Mr. E. T. PARSONS University Club, S. F.OUTING COMMITTEE'MR. WM. E. COLBY ChairmanPROF. J. N. LE CONTE MR. E. T. PARSONSHONORARY VICE-PRESIDENTSPROF. GEORGE DAVIDSON . . . San FranciscoMr. R. U. JOHNSON . . . The Century, New York Pres. DAVID STARR JORDAN . Stanford University Mr. GIFFORD PINCHOT . . . Washington, D. C. COMMITTEE ON PUBLICATIONSMr. ELLIOTT MCALLISTER, Editor Crocker Bldg., S. F. Prof. WM, F. BADÉ, Book Reviews . BerkeleyProf. WM. R. DUDLEY, Forestry Notes . Stanford Univ. Mr. ALEX. G. EELLS . . . Crocker Bldg., S. F. Mr. J. S. HUTCHINSON, Jr. Claus Spreckels Bldg., S. F. Mr. E. T. PARSONS ... University Club, S. F. Prof. H. W. ROLFE . Stanford UniversityMr. WILLOUGHBY RODMAN Bryson Block, Los AngelesMiss F. B. WHITTIER . Mechanics' Library, S. F.April 12th.1906.My dear Mr. Muir:-Yours of the 7th. .lust received. I wired you as I did the other day because I saw in the papers that Speaker Cannon of the House of Representatives had refused to consider the Yosemite Recession bill accepting the Valley on behalf of the U.S. on the ground that it would mean additional appropriation for care, trails, roads, etc. I knew that If he would not allow it to be called up, that the bill was killed as far as this session is concerned . I at once wired Congressman J. N. Gillettwho has charge of the bill in the House asking him if the newspaper reportwas true and whether common would consider the bill. He replied "Can't say for sure it looks doubtful, if you can help do so" I felt that it would be a great misfortune to have the bill fail after all our work, especially when we had so nearly accomplished our purpose. You can picture the exultation of our friend, Senator Curtin. He could probably get the next State Legislature which meets this next January to repeal the act of recession before Congress could get another chance to act on it. It is a case of get the bill through now or never.I wired to you and Johnson and Pinchot. I understand Johnson is in Italy, which is very unfortunate for he could reach the President and would undoubtedly do so. I think the matter ought to be called to the President's notice for, with so many matters on his mind, he probably does not know anything about the situation. I would write him only the letter probably never would reach him. A letter from you would be sure to reach him personally and would do the most good.The bill was amended to let the Huntington railroad in but it ought to help us now as the railroad is anxious now to see the bill pass. The area excluded was very small and almost entirely West of the Wawona Stage road so it does no harm. They wanted to cut out much more but the Secretary of the Interior would not allow it. Best wishes,Very sincerely,[illegible]03719