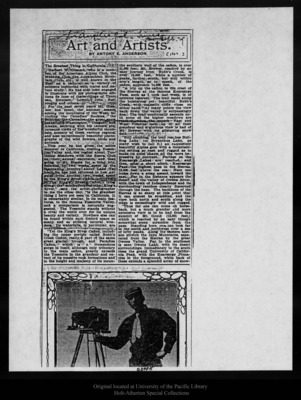 Art and Artists.BY ANTONY E ANDERSON.1907The Greatest Thing in California.Herbert W. Gleason, Who is a member of the American Alpine Club, the Mazama Club, the Appalachian Mountain Club, etc., is well known in the East as a lecturer on a variety of subjects connected with travel and nature study. He has also been engaged to illustrate with his photographs editions de luxe of the writings of Thoreau, Emerson, Lowell, John, Burroughs and others.For the past seven years Mr. Gleason has spent the summer season among the mountains of the West, including the Canadian Rockies, the Selkirks the Cascades, the great snow peaks of Washington. Onegon and Alaska, securing with his camera picturesque views of the wonderful mountain scenery of these various regions, and also exceptionally beautiful photographs of the wild flowers birds and animals.This year he has given the entire summer to California, visiting Yosemite Valley and the region about Tuolumne Meadows with the Sierra Club on their annual excursion, and then going to Mt. Shasta for a brief trip, followed by two weeks spent in the fascinating country about Lake Tahoe. He has just returned to Los Angeles from another two weeks spent in the King's River Canon. "The King's River Canon lying along the south fork of the King's River," said the artist-photographer to me the other day, "is the grandest thing I have yet seen in California. It is remarkably similar, in its main features, to the famous Yosemite Valley, and a comparison is naturally suggested. The Yosemite stands without a rival the world over for its unique beauty and variety. Nowhere else can be found within such limited space so many and so striking natural wonders. Its waterfalls, in particular, are unsurpassed."Yet the King's River Canon, including the upper portion called Bubb's Creek Canon, really a part of the same great glacial trough, and Paradise Canon, which is a tremendous gorge in itself, although only tributary to the main canon, greatly exceeds the Yosemite in the grandeur and extent of its massive rock formations and in the height and majesty of its moun- the southern wall of the canon, is over 11,000 feet; Mt. Brewer, reached by an easy journey from Bubb's Creek, is over 13.000 feet, while a number of peaks, farther south; - but still within arm's length, so to, speak, of the canon, approach 14,000 feet."A trip up the canon to the crest of the Sierras at the famous Kearsarge Pass, such as I took last week, is of extreme interest. The trail leads along the boisterous yet beautiful Bubb's Creek, with majestic cliffs close on either hand. At many points the view back down the valley is surpassingly fine. The trail continually ascends until some of the higher meadows are reached when the superb East and West Videttes loom up in all their grandeur and a glorious view is had of Mt. Brewer with its glistening snow field."Still climbing, the trail reaches Bullfrog Lake (or Bryanthus Lake, as many wish to call it,) an exquisitely beautiful Alpine gem with a mountainous setting so vast and rugged as to make its quiet charm all the more impressive by contrast. Farther on the Kearsarge Lakes are reached, and then, after a short climb, Kearsarge Pass---the highest pass in the Sierras, 12000 feet above the sea. Here one looks down a steep ascent toward the east. Far in the distance appears the desert and the valley of Owens River, with the town of Independence and its surrounding ranches clearly discerned through the haze. The backbone of the Sierras is so sharp at this point that it can almost be straddled, and the view both north and south along the ridge is exceedingly wild and rugged."Thus far one can come on horseback, but a much grander and more extensive view is to be had from the summit of Mt. Gould (13,001 feet,) which is reached by an easy though somewhat steep scramble from the pass. Standing here, one can look far to the north and northwest over a sea of lofty peaks. Along the eastern horizon stretch the Inyo Mountains, separated from the Sierras by the great Owens Valley. Far in the southeast is seen Owens Lake, with its desert surroundings. Immediately to the south rises the grand University of California Peak, with the Kearsarge Pinnacles in the foreground, while back of these extends a splendid array of snow-03995