Editor of the Call 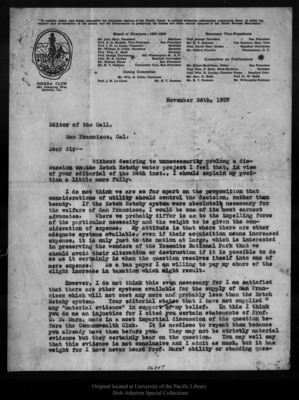 "To explore, enjoy, and render accessible the mountain regions of the Pacific Coast; to publish authentic information concerning them; to enlist the support and co-operation of the people and the Government in preserving the forests and other natural features of the Sierra Nevada Mountains."SIERRA CLUB2901 Channing WayBerkeley, Cal.Board of Directors-1907-1908Mr. John Muir, President MartinezProf. A. G. McAdie, Vice-President San FranciscoProf. J. N. Le Conte, Treasurer BerkeleyMr. William E. Colby, Secretary BerkeleyProf. Wm. F. Bade BerkeleyProf. George Davidson 2221 Washington St., S. F.Prof. W. R. Dudley Stanford UniversityMr. Warren Olney San FranciscoMr. E. T. Parsons University Club, San FranciscoOuting CommitteeMr. Wm. E. Colby, ChairmanProf. J. N. Le Conte Mr. E. T. ParsonsHonorary Vice-PresidentsProf. George Davidson San FranciscoMr. R. U. Johnson The Century, New YorkPres. David Starr Jordan Stanford UniversityMr. Gifford Pinchot Washington, D. C.Committee on PublicationsMr. Elliott McAllister, Editor San FranciscoProf. Wm. F. Bade, Book Reviews BerkeleyProf. Wm. R. Dudley, Forestry Notes Stanford Univ.Mr. Alex. G. Eells Prof. H. W. RolfeMr. E. T. Parsons Mr. Willoughby RodmanNovember 26th, 1907Editor of the Call,San Francisco, Cal.Dear Sir:-Without desiring to unnecessarily prolong a discussion on the Hetch Hetchy water project I feel that, in view of your editorial of the 24th Inst., I should explain my position a little more fully.I do not think we are so far apart on the proposition that considerations of utility should control the decision, rather than beauty. If the Hetch Hetchy system were absolutely necessary for the welfare of San Francisco, I would be one of its most earnest advocates. Where we probably differ is as to the impelling force of the particular necessity and the weight to be given the consideration of expense. My attitude is that where there are other adequate systems available, even if their acquisition means increased expense, it is only just to the nation at large, which is interested in preserving the wonders of the Yosemite National Park that we should avoid their alteration or destruction if It is possible to do so as it certainly is when the question resolves itself into one of mere expense. As a tax payer I am willing to pay my share of the slight increase in taxation which might result.However, I do not think this even necessary for I am satisfied that there are other systems available for the supply of San Francisco which will not cost any more and probably less than the Hetch Hetchy system. Your editorial states that I have not supplied any "material evidence" in support of my belief. In this I think you do me an injustice for I cited you certain statements of Prof. C. D. Marx, made in a most impartial discussion of the question before the Commonwealth Club. It is needless to repeat them because you already have them before you. They may not be strictly material evidence but they certainly bear on the question. You may well say that this evidence is not conclusive and I admit as much, but it has weight for I have never heard Prof. Marx' ability or standing ques-06347