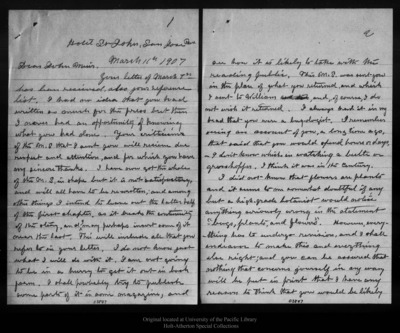 1Hotel St John, San Jose CalMarch 11th 1907Dear John Muir.Your letter of March 7th has been received, also your response list. I had no idea that you had written so much for the press but then I never had an opportunity of knowing what you had done. Your criticism's of the M. S that I sent you will receive due respect and attention, and for which you have my sincere thanks. I have now got the whole of the M. S. in shape but it is not satisfactory, and will all have to be re-written; and among other things I intend to leave out the latter half of the first chapter, as it breaks the continuity of the story, and I may perhaps invert some of it near the last. This will include all that you refer to in your letter. I do not know just what I will do with it. I am not going to be in a hurry to get it out in book form. I shall probably try to publish some parts of it in some magazine, and038472see how it is likely to take with the reading [public?]. This M. S. was sent you in the place of what you returned, and which I sent to William, and, of course, I do not wish it returned. I always had it in my head that you were a bug-ologist. I remember seeing an account of you, a long time ago, that said that you would spend hours or days, - I don't know which in watching a [butte?] or grasshopper. I think it was in the Century.I did not know that flowers are plants and it seems to me somewhat doubtful if any but a high-grade botanist would notice anything seriously wrong in the statement "bugs, plants, and flowers". However, everything has to undergo revision, and I shall endeavor to make this and everything else right; and you can be assured that nothing that concerns yourself in any way will be put in print that I have any reason to think that you would be likely03847