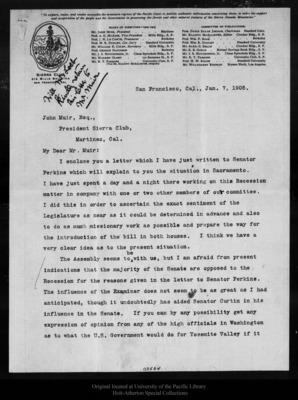 "To explore, enjoy, and render accessible the mountain regions of the Pacific Coast; to publish authentic information concerning them; to enlist the support and co-operation of the people and the Government in preserving the forests and other natural features of the Sierra Nevada Mountains."BOARD OF DIRECTORS-1904-1905Mr. John Muir, President MartinezProf. A. G. MCADIE, Vice-President Mills Bldg., S. F. Prof. J. N. LE CONTE, Treasurer BerkeleyProf. W. R. DUDLEY, Cor. Sec'y Stanford UniversityMr. WILLIAM E. COLBY, Secretary Mills Bldg., S. F. Prof. GEORGE DAVIDSON BerkeleyMr. J. S. HUTCHINSON, Jr. Claus Speckels Bldg., S. F. Mr. WARREN OLNEY 101 Sansome St. S. F. Mr. E. T. PARSONS University Club, S. F. (Vice Mr. ELLIOTT MCALLISTER, resigned)COMMITTEE ON PUBLICATIONS: Pres. DAVID STARR JORDAN, Chairman Stanford Univ. Mr. ELLIOTT MCALLISTER, Editor Crocker Bldg., S. F. Prof. WM. F. BADE BerkeleyProf. WM. R. DUDLEY Stanford UniversityMr. ALEX. G. EELLS Crocker Bldg., S. F. Mr. E. B. GOULD Mutual Savings Bank Bldg., S. F. Mr. J. S. HUTCHINSON, Jr. Claus Spreckels Bldg., S. F. Mr. E. T. PARSONS University Club, S. F. Prof. H. W. ROLFE Stanford UniversityMr. WILLOUGHBY RODMAN Bryson Block, Los AngelesSan Francisco, Cal., Jan. 7, 1905. John Muir, Esq.,President Sierra Club, Martinez, Cal. My Dear Mr. Muir:I enclose you a letter which I have just written to Senator Perkins which will explain to you the situation in Sacramento. I have just spent a day and a night there working on this Recession matter in company with one or two other members of our committee. I did this in order to ascertain the exact sentiment of the Legislature as near as it could be determined in advance and also to do as much missionary work as possible and prepare the way for the introduction of the bill in both houses. I think we have a very clear idea as to the present situation.The Assembly seems to be with us, but I am afraid from present indications that the majority of the Senate are opposed to the Recession for the reasons given in the letter to Senator Perkins. The influence of the Examiner does not seem to be as great as I had anticipated, though it undoubtedly has aided Senator Curtin in his influence in the Senate. If you can by any possibility get any expression of opinion from any of the high officials in Washington as to what the U.S. Government would do for Yosemite Valley if it03504