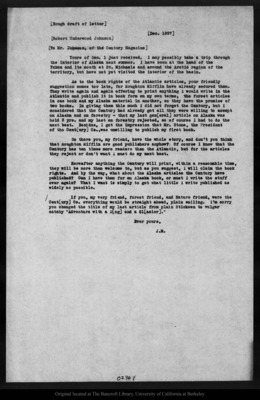 [Rough draft of letter][Dec. 1897][Robert Underwood Johnson][To Mr. Johnson, of the Century Magazine]Yours of Dec. 1 just received. I may possibly take a trip through the interior of Alaska next summer. I have been at the head of the Yukon and its mouth at St. Michaels and around the Arctic region of the territory, but have not yet visited the interior of the basin.As to the book rights of the Atlantic articles, your friendly suggestion comes too late, for Houghton Mifflin have already secured them. They write again and again offering to print anything I would write in the Atlantic and publish it In book form on my own terms, the forest articles in one book and my Alaska material in another, so they have the promise of two books. In giving them this much I did not forget the Century, but I considered that the Century had already got all they were willing to accept on Alaska and on forestry - that my last gen[eral] artlole on Alaska was held 3 yrs. and my last on forestry rejected, so of course I had to do the next best. Besides, I got the Impression that Mr. Stone, the President of the Cent[ury] Co., was unwilling to publish my first book.So there you, my friend, have the whole story, and don't you think that Houghton Mifflin are good publishers anyhow? Of course I know that the Century has ten times more readers than the Atlantic, but for the articles they reject or don't want I must do my next best.Hereafter anything the Century will print, within a reasonable time, they will be more than welcome to, but as you suggest, I will claim the book rights. And by the way, what about the Alaska articles the Century have published? Can I have them for an Alaska book, or must I write the stuff over again? What I want is simply to get what little 1 write published as widely as possible.If you, my very friend, forest friend, and Nature friend, were the Cent[ury] Co. everything would be straight ahead, plain sailing. I'm sorry you changed the title of my last article from plain Stickeen to vulgar catchy "Adventure with a D[og] and a Gl[acier]."Ever yours,J.M.02368