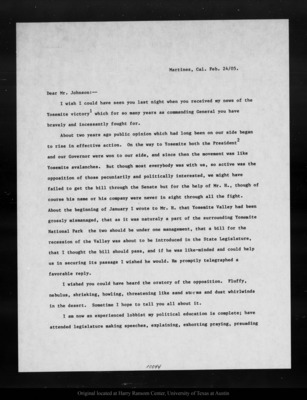 Martinez, Cal. Feb. 24/05.Dear Mr. Johnson:--I wish I could have seen you last night when you received my news of the Yosemite victory. which for so many years as commanding General you have bravely and incessantly fought for.About two years ago public opinion which had long been on our side began 2 to rise in effective action. On the way to Yosemite both the President and our Governor were won to our side, and since then the movement was like Yosemite avalanches. But though most everybody was with us, so active was the opposition of those pecuniarily and politically interested, we might have failed to get the bill through the Senate but for the help of Mr. H., though of course his name or his company were never in sight through all the fight. About the beginning of January I wrote to Mr. H. that Yosemite Valley had been grossly mismanaged, that as it was naturaly a part of the surrounding Yosemite National Park the two should be under one management, that a bill for the recession of the Valley was about to be introduced in the State Legislature, that I thought the bill should pass, and if he was like-minded and could help us in securing its passage I wished he would. He promptly telegraphed a favorable reply.I wished you could have heard the oratory of the opposition. Fluffy, nebulus, shrieking, howling, threatening like sand storms and dust whirlwinds in the desert. Sometime I hope to tell you all about it.I am now an experienced lobbist my political education is complete; have attended legislature making speeches, explaining, exhorting praying, prsuading10044