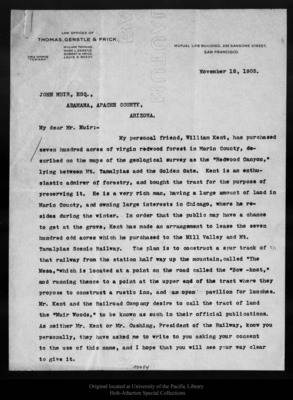 LAW OFFICES OFTHOMAS,GERSTLE & FRICK.WILLIAM THOMAS.MARK L.GERSTLE.ROBERT N.FRICK.LOUIS S. BEEDY.CABLE ADDRESS"TOM ARK"MUTUAL LIFE BUILDING, 222 SANSOME STREET,SAN FRANCISCO.November 18, 1905.JOHN MUIR, ESQ.,ADAMANA, APACHE COUNTY,ARIZONA.My dear Mr. Muir:-My personal friend, William Kent, has purchased seven hundred acres of virgin redwood forest In Marin County, described on the maps of the geological survey as the "Redwood Canyon," lying between Mt. Tamalplas and the Golden Gate. Kent is an enthusiastic admirer of forestry, and bought the tract for the purpose of preserving it. He Is a very rich man, having a large amount of land in Marin County, and owning large interests in Chicago, where he resides during the winter. In order that the public may have a chance to get at the grove, Kent has made an arrangement to lease the seven hundred odd acres which he purchased to the Mill Valley and Mt. Tamalplas Scenic Railway. The plan is to construct a spur track of that railway from the station half way up the mountain,called "The Mesa,"which is located at a point on the road called the "Bow -knot," and running thence to a point at the upper end of the tract where they propose to construct a rustic inn, and an open pavilion for lunches. Mr. Kent and the Railroad company desire to call the tract of land the "Muir Woods," to be known as such in their official publications. As neither Mr. Kent or Mr. Cushing, President of the Railway, know you personally, they have asked me to write to you asking your consent to the use of this name, and I hope that you will see your way clear to give it.03654??