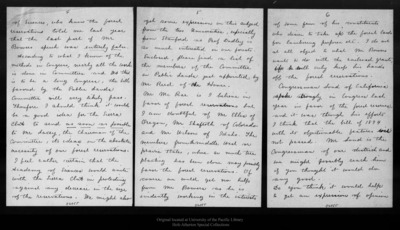 4of Sciences, who know the forest reservations told me last year that the last part of Mr Bowers speech was entirely false.According to what I know of the methods in Congress, nearly all the work is done in Committees, and as this is to be a long Congress, the bills favored by the Public Lands Committee will very likely pass. Therefore I should think it would be a good idea for the Sierra Club to send as soon as possible to Mr Lacey, the Chairman of the Committee, its ideas on the absolute necessity of our forest reservations.I fely rather certain that the Academy of Sciences would unite with the Sierra Club in protesting against any discrease in the size of the reservations. We might also020555get some expression on this subject from the two Universities, especially from Stanford, as Prof Dudley is so much interested in our forests. Enclosed, please find a list of the members of the Committee in Public Lands just appointed by Mr Reed of the House.Mr McRae is I believe in favor of forest reservations but I am doubtful of Mr Ellis of Oregon, Mr. Shafroth of Colorado and Mr Wilson of Idaho. The members from the middle West or prairie states, where so much tree planting has been done may possibly favor the forest reservations. Of course we could get no help from Mr Bowers as he is evidently working in the interests020556of some few of his constituents who desire to take up the forest lands for lumbering purposes, etc. I do not at all object to what Mr Bowers wants to do with the railroad grants, if he will only keep his hands off the forest reservations.Congressman Loud of California spoke strongly in Congress last year in favor of the forest reserves, and it was through his efforts I think that the bill of 1894 with its objectionable features was not passed. Mr Loud is the Congressman of our district and we might possibly reach him if you thought it would do any good.Do you think it would help to get an expression of opinion02055