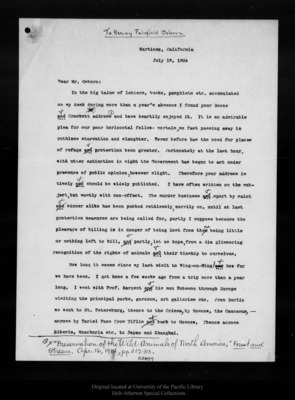 To Henry Fainfield OsbornMartinez, CaliforniaJuly 16, 1904Dear Mr. Osborn:In the big talus of letters, books, pamphlets etc. accumulated on my desk during more than a year's absence I found your Boone and Crockett address and have heartily enjoyed it. It is an admirable plea for our poor horizontal fellow- mortals, so fast passing away in ruthless starvation and slaughter. Never before has the need for places of refuge and protection been greater. Fortunately at the last hour, with utter extinction in sight the Government has begun to act under pressure of public opinion, however slight. Therefore your address is timely and should be widely published. I have often written on the subject, but mostly with non-effect. The murder business and sport by saint and sinner alike has been pushed ruthlessly merrily on, until at last protective measures are being called for, partly I suppose because the pleasure of killing is in danger of being lost from there being little or nothing left to kill, and partly, let us hope>from a dim glimmering recognition of the rights of animals and their kinship to ourselves.How long it seems since my last visit to Wing-on-Wing! how far we have been, I got home a few weeks ago from a trip more than a year long, I went with Prof, Sargent and his son Robeson through Europe visiting the principal parks, gardens, art galleries etc. From Berlin we went to St. Petersburg, thence to the Crimea, by Moscow, the Caucasus, - across by Dariel Pass from Tiflis and back to Moscow. Thence across Siberia, Manchuria etc. to Japan and Shanghai."Preservation of the Wild animals of north America," Forest au Streau, apr.16,1904, pp 312-313.03409