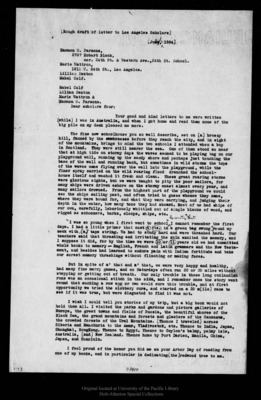 [Rough draft of letter to Los Angeles Scholars][Ju1y, 1904]Harmon 0. Parsons,2707 Hobart Block,cor. 24th St. & Western Ave., 24th St. School.Marie Wattron,1812 W. 24th St., Los Angeles.Lillian Sexton Mabel Colf.Mabel ColfLilian SextonMarie Wattron & Harmon Parsons.Dear scholars four:Your good and kind letters to me were written [while] I was in Australia, and when I got home and read them none of the big pile on my desk pleased me more.The fine new schoolhouse you so well describe, set on [a] breezy hill, fanned by the breezes before they reach the city, and in sight of the mountains, brings to mind the two schools I attended when a boy in Scotland. They were still nearer the sea. One of them stood so near that at high tide on stormy days the waves seemed to be playing tag on our playground wall, running up the sandy shore and perhaps just touching the base of the wall and running back, but sometimes in wild storms the tops of the waves came flying over the wall into the playground, while the finer spray carried on the wild roaring flood drenched the school-house itself and washed it fresh and clean. These great roaring storms were glorious sights, but we were taught to pity the poor sailors, for many ships were driven ashore on the stormy coast almost every year, and many sailors drowned. From the highest part of the playground we could see the ships sailing past, and often tried to guess whence they came, where they were bound for, and what they were carrying, and judging their depth in the water, how many tons they had aboard. Most of us had ships of our own, carefully, laboriously whittled out of single blocks of wood, and rigged as schooners, barks, sloops, ships, etc."I was so young when I first went to school" he wrote, "that I cannot remember the first days. I had a little primer that cost (4)(cts.) in a green bag swung around my neck with a tape string. We had to study hard and were thrashed hard. Our teachers said that thrashing and irritating the skin excited the memory, and I suppose it did, for by the time we were (10) or (ll) years old we had committed whole books to memory -- English, French and Latin grammars and the New Testament, and besides had learned to endure pain with Indian fortitude and take our sorest memory thrashings without flinching or making faces.But in spite of a' that and a' that, we were very happy and healthy, had many fine merry games, and on Saturdays often ran 20 or 30 miles without stopping or getting out of breath. Our only trouble in these long outlandish runs was an occasional stitch in the side, and I remember once the story went round that sucking a raw egg or two would cure this trouble, and at first opportunity we tried the slobbery cure, and started on a 20 m[ile] race to see if it was true, but were disgusted to find it was not.I wish I could tell you stories of my trip, but a big book would not hold them all. I visited the parks and gardens and picture galleries of Europe, the great towns and fields of Russia, the beautiful shores of the Black Sea, the grand mountains and forests and glaciers of the Caucasus, the crowded forests of the Ural Mountains. [Thence I traveled] across Siberia and Manchuria to the Amur, Vladivostok, etc. Thence to India, Japan, Shanghai, HongKong. Thence to Egypt. Thence to Ceylon's balmy, palmy isle, Australia, [and] Hew Zealand. Thence home by Port Darien, Manila, China, Japan, and Honolulu.I feel proud of the honor you did me on your Arbor Day of reading from one of my books, and in particular in dedicating [the] redwood tree to me.03410