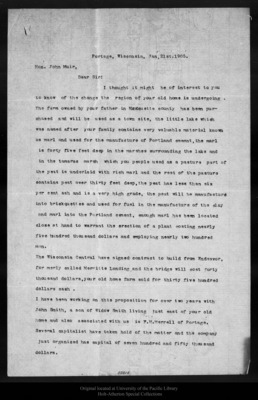 Portage, Wisconsin, Jan. 21st, 1905.Hon. John Muir,Dear Sir:I thought it might be of interest to you to know of the change the region of your old home is undergoing . The farm owned by your father in Maquette county has been purchased and will be used as a town site, the little lake which was named after your family contains very valuable material known as marl and used for the manufacture of Portland cement, the marl is forty five feet deep in the marshes surrounding the lake and in the tamarac marsh which you people used as a pasture part of the peat is underlaid with rich marl and the rest of the pasture contains peat over thirty feet deep, the peat has less than six per cent ash and is a very high grade, the peat will be manufacture into brickquettes and used for fuel in the manufacture of the clay and marl into the Portland cement, enough marl has been located close at hand to warrant the erection of a plant costing nearly five hundred thousand dollars and employing nearly two hundred men.The Wisconsin Central have signed contract to build from Endeavor, for merry called Merritts Landing, and the bridge will cost forty thousand dollars, your old home farm sold for thirty five hundred dollars cash.I have been working on this proposition for over two years with John Smith, a son of Widow Smith living just east of your old home and also associated with us is F. H. Merrell of Portage. Several capitalist have taken hold of the matter and the company just organized has capital of seven hundred and fifty thousand dollars.03515