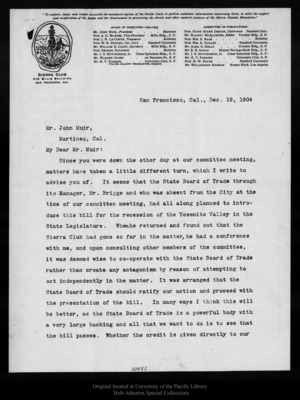 "To explore, enjoy, and render accessible the mountain regions of the Pacific Coast; to publish authentic information concerning them; to enlist the support and co-operation of the people and the Government in preserving the forests and other natural features of the Sierra Nevada Mountains."BOARD OF DIRECTORS-1904-1905Mr. JOHN MUIR, President MartinezProf. A. G. McADIE, Vice-President Mills Bldg., S. F.Prof. J. N. LE CONTE, Treasurer BerkeleyProf. W. R. DUDLEY, Cor. Sec'y Standford UniversityMr. WILLIAM E COLBY, Secretary Mills Bldg., S. F.Prof. GEORGE DAVIDSON BerkeleyMr. J. S. HUTCHINSON, Jr. Claus Spreckels Bldg., S. F.Mr. WARREN OLNEY 101 Sansome St., S. F.Mr. E. T. PARSONS University Club, S. F.(Vice Mr. ELLIOTT McALLISTER, resigned)COMMITTEE ON PUBLICATIONS:Pres. DAVID STARR JORDAN, Chairman Standford Univ.Mr. ELLIOTT McALLISTER, Editor Crocker Bldg., S. F.Prof. WM. F. BADE BerkeleyProf WM. R. DUDLEY Stanford UniversityMr. ALEX. G. EELLS Crocker Bldg., S. F.Mr. E. B. GOULD Mutual Savings Bank Bldg., S. F.Mr. J. S. HUTCHINSON, Jr. Claus Spreckels Bldg., S. F.Mr. E. T. PARSONS University Club, S. F.Prof. H. W. ROLFE Stanford UniversityMr. WILLOUGHBY RODMAN Bryson Block, Los AngelesSIERRA CLUB316 MILLS BUILDINGSAN FRANCISCO, CAL.San Francisco, Cal., Dec. 19, 1904Mr. John Muir,Martinez, Cal.My Dear Mr. Muir:Since you were down the other day at our committee meeting, matters have taken a little different turn, which I write to advise you of. It seems that the State Board of Trade through its Manager, Mr. Briggs and who was absent from the City at the time of our committee meeting, had all along planned to introduce this bill for the recession of the Yosemite Valley in the State Legislature. When he returned and found out that the Sierra Club had gone so far in the matter, he had a conference with me, and upon consulting other members of the committee, it was deemed wise to co-operate with the State Board of Trade rather than create any antagonism by reason of attempting to act independently in the matter. It was arranged that the State Board of Trade should ratify our action and proceed with the presentation of the bill. In many ways I think this will be better, as the State Board of Trade is a powerful body with a very large backing and all that we went to do is to see that the bill passes. Whether the credit is given directly to our03482