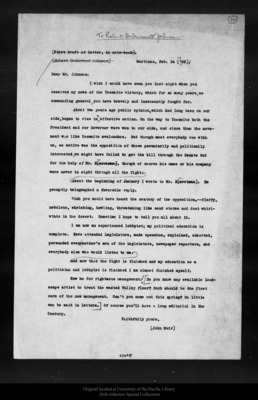 70To Robert Underwood JohnsonMartinez, Feb. 24 [1905]Dear Mr. Johnson:I wish I could have seen you last night when you received my news of the To Yosemite victory, which for so many years as commanding general you have bravely and incessantly fought for.About two years ago public opinion.which had long been on our side, began to rise in to effective action. On the way to Yosemite both the President and our Governor wore won to our side, and since then the movement was like Yosemite avalanches. But though most everybody was with us, so active was the opposition of those pecuniarily and politically interested we might have failed to get the bill through the Senate but for the help of Mr, H-, though of course his name or his company were never in sight through all the figit.About the beginning of January I wrote to Mr, H-. He promptly telegraphed a favorable reply.Wish you oould have heard the oratory of the opposition,--fluffy, nebulous, shrieking, howling, threatening like sand storms and dust whirl-winds in the desert. Sometime I hope to tell you all about it.I am now an experienced lobbyist; my political education is complete. lave attended Legislature, made speeches, explained, exhorted, persuaded every mother's son of the legislators, newspaper reporters, and everybody else who would listen to me.And now that the fight is finished and my education as a politician and lobbyist is finished I am almost finished myself.Now ho for righteous management [Do you know any available land-scape artist to treat the wasted Valley floor? Such should be the first care of the new management. Can't you come out this spring? So little can be said in lettors.] Of course you'll have a long editorial in the Century.Faithfully yours,[John Muir]03098