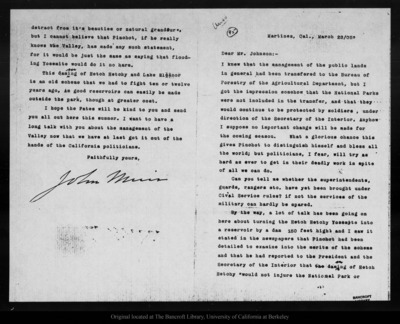 detract from it's beauties or natural grandeur" but I oannot believe that Pinohot, if be really knows tfce Valley, has made'any suob statement, for it would be just the sane as saying that flooding Yosemite would do it no harm. This darning of Hetoh Hetohy and Lake Eleanor is an old scheme that we had to fight ten or twelve years ago. As good reservoirs can easily be made outside the park, though at greater cost. I hope the Fates will be kind to you and send you all out here this summer, i want to have a long talk with you about the management of the Valley now that we have at last got it out of the hands of the California politioians. Faithfully yours. [illegible] 95Martinez, Cal., March 23/053Dear Mr. Johnson:- I knew that the management of the public lands in general had been transfered to the Bureau of Forestry of the Agricultural Department, but I got the impression somehow that the National Parks were not included in the transfer, and - that – they would continue to be protected by soldiers , under direction of the Secretary of the Interior. Anyhow I suppose no important change will be made for the coming season. What a glorious change this gives Pinchct to distinguish himself and bless all the world; but politicians, I fear, will try as hard as ever to get in their deadly work in spite of all we can do. v.Can you tell me whether the superintendents, guards, rangers etc. have yet been brought under Cival Service rules? if not the services of the military can hardly be spared.By the way, a lot of talk has been going on here about turning the Hetch Hetchy Yosemte into a reservoir by a dam 3.50 feet hight and I saw it stated in the newspapers that Pinchct had been detailed to examine into the merits of the scheme and that he had reported to the President and the Secretary of the Interior that darning of Hetch Hetchy "would not injure the National Park orBANCROFT