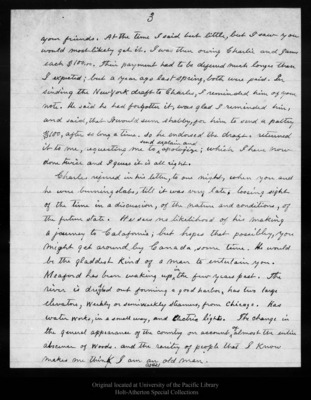 3your friends. At the time I said but little, but I saw you would most likely get it. I was then owing Charlie and James each $100.00. Their payment had to be deferred much longer than I expected; but a year ago last spring, both were paid. In sending the New York draft to Charles, I reminded him of your note. He said he had forgotten it, was glad I reminded him, and said, that It would seem shabby, for him to send a paltry $100, after so long a time. So he endorsed the draft, returned it to me, requesting me to send explain and apologize; which I have now done twice and I guess it is all right.Charles referred in his letter, to one night, when you and he were burning slabs, till it was very late loosing sight of the time in a discussion, of the nature and conditions, of the future state. He sees no likelihood of his making a journey to Calafornia; but hopes that possibly, you might get around by Canada, some time. He would be the gladdest kind of a man to entertain you. Meaford has been waking up in the few years past. The river is dredghed out forming a good harbor, has two large elevators, weekly or semi-weekly steamers, from Chicago. Has water works, in a small way, and electric lights. The change in the general appearance of the country on account of almost the entire abscence of woods. and the [illegible] of people that I know makes me thin I am an old man.03421