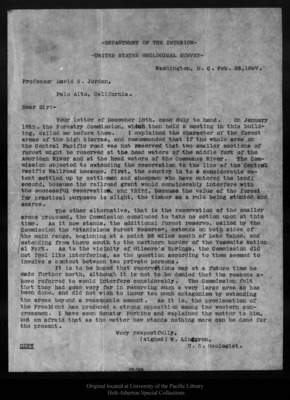 -DEPARTMENT OF THE INTERIOR--UNITED STATES GEOLOGICAL SURVEY-Washington, D. C. Feb. 25,1897.Professor. David S. Jordan,Palo Alto, California.Dear Sir:-Your letter of December 18th, came duly to hand. On January 15th. the Forestry Commission, which then held a meeting in this building, called me before them. I explained the character of the forest areas of the high Sierras, and recommended that if the whole area on the Central Pacific road was not reserved that two smaller sections of forest might be reserved at the head waters of the middle fork of the American River and at the head waters of the Cosmunes River. The Commission objected to extending the reservation to the line of the Central Pacific Railroad because, first, the country is to a considerable extent settled up by cattlemen and sheepmen who have entered the land; second, because the railroad grant would considerably interfere with the successful reservation, and third, because the value of the forest for practical purposes is slight, the timber as a rule being stunted and scarce.The other alternative, that is the reservation of the smaller areas proposed, the Commission concluded to take no action upon at this time. As it now stands, the additional forest reserve, called by the Commission the "Stanislaus Forest Reserve", extends on both sides of the main range, beginning at a point 35 miles south of Lake Tahoe, and extending from there south to the northern border of the Yosemite National Park. As to the vicinity of Gilmore's Springs, the Commission did not feel like interfering, as the question according to them seemed to involve a contest between two private persons.It is to be hoped that reservations may at a future time be made further north, although it is not to be denied that the reasons above referred to would interfere considerably. The Commission felt that they had gone very far in reserving such a very large area as has been done, and did not wish to incur too much antagonism by extending the areas beyond a reasonable amount. As it is, the proclamation of the President has produced a strong opposition among the western congressmen. I have seen Senator Perkins and explained the matter to him, but am afraid that as the matter now stands nothing more can be done for the present.Very respectfully,(signed) W. Lindgren,COPYU. s. Geologist.06/86