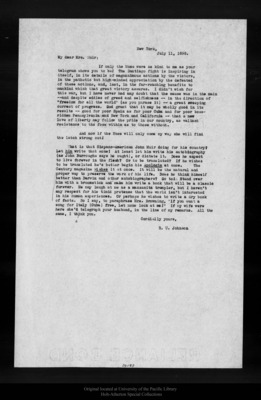 New York,July 11, 1898.br>My dear Mrs. Muir.If only the Muse were as kind to me as your telegram shows you to be! The Santiago fight is inspiring in itself, in its details of magnanimous actions by the victors, in the pathetic but high-minded appreciation by the defeated of these actions, and, last, in the far-reaching benefits to mankind which that great victory assures. I didn't wish for this war, but I have never had any doubt that the cause was in the main -and despite eddies of greed and selfishness -- in the direction of "freedom for all the world" (as you phrase it) -- a great sweeping current of progress. God grant that it may be wholly good in its results -- good for poor Spain as for poor Cuba and for poor boss-ridden Pennsylvania, and New York and California -- that a new love of liberty may follow the pride in our country, as valiant resistance to the foes within as to those without.And now if the Muse will only come my way she will find the latch strong out!What is that Hispano-American John Muir doing for his country? Let him write that sone! At least let him write his autobiography (as John Burroughs says he ought), or dictate it. Does he expect to live forever in the flesh? Or to be translated? If he wishes to be translated he's better begin his Apologia at once. The Century magazine wishes it at once. It will be the natural and proper way to preserve the work of his life. Does he think himself better than Darwin and other autobiographers? Go to! Stand over him with a broomstick and make him write a book that will be a classic forever. He may laugh at me as a manzanita trampler, but I haven't any respect for his timid pretense that the world isn't interested in his human experiences. Or perhaps he wishes to write a dry book of facts. So I say, to paraphrase Mrs. Browning, "If you want a song for Italy (Cuba) free, Let none look at me!" If my wife were here she'd telegraph your husband, in the line of my remarks. All the same, I thank you.Cordially yours,R. U. Johnson06193